Don't forget, 'The Interview' is now available on Netflix 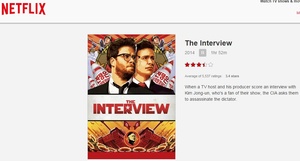 As a reminder, if you are a Netflix subscriber and haven't yet seen the now infamous 'The Interview,' it is available to stream starting today.
The company did not discuss the terms of the deal, but it certainly marks the quickest time in which a major motion picture has been made available via the streaming service.

Sony Pictures recently announced that the film brought in $46 million from digital rentals and sales and from theater showings in a a couple hundred independent theater chains. The movie will hit Blu-ray on February 17th.

The movie dominated headlines in December after Sony Pictures was decimated by a cyber attack and the attackers threatened a terrorist attack on movie theaters leading the major U.S. chains to suspend the release. Sony then made film available online as a rental or purchase on Christmas, where it became the top online film of all-time.

If Sony had went through with their initial release of this movie, it's highly unlikely that there would've been an attack..spooking a nation by threatening message on a computer is not the answer to the problem..bullying isn't the answer either. We MUST not give in to terrorist threats!! Well, if anything, it proves one thing, we can put a movie from the theater to streaming in a very short period of time..it can be done!

This movie was better than I expected. However, I can now believe that North Korea was upset enough with Sony that they were behind the hack.

ugh. I hated Franco's character. Liked Rogan. It seems they just let them improve for 2 hours. I thought it was weak. Just my 2¢.