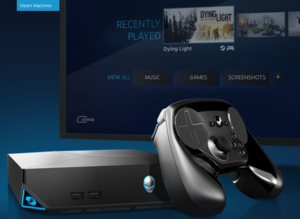 Valve has announced that consumers who pre-order a Steam Machine will receive their hardware on October 16th.
What is a Steam Machine? The machines are pre-built gaming PCs that run on either Windows with the Steam client pre-installed or on Valve's own SteamOS - a Linux-based operating system based on Steam - and are aimed at the pure gamer types that want to game on the big screen.

The first Steam Machines will come from OEM partners Alienware and Cyberpower and if you are not interested in pre-ordering, you can get the PCs at retailers starting on November 10th starting at $450.

While the systems may only appeal to a niche group, especially since the gaming catalogs for Linux are not great, there are some interesting features, most notably the controller. The Steam Controller is built for standard console gaming but also for games that have traditionally used a keyboard and mouse. There are two clickable trackpads and sixteen buttons total. The trackpads also include haptic feedback.


Not enough to buy one but still...


Wonder what Ninty would think?

These seem like such a waste. Anyone who's a 'pure gamer' already knows how to play PC games on a TV, with a controller....and its incredibly simple and easy to do.
This is basically a Steam-branded Windows box (unless Linux/SteamOS really takes off out of its niche, which I seriously doubt). I just don't get the hype behind these when they seem to just be more of the same pre-built Windows gaming rigs.
All I'd want from this is the controller, which hopefully will be sold seperately.


Not enough to buy one but still...


Wonder what Ninty would think?

The touchpad technology was given a good shot back in the early 1990s in the form of a Turbo Touch 360 I tried one for a few minutes but went right back to the tactile D-Pad controller. It was a good quality controller, but I could never tell where my thumb was positioned on the pad most of the time. I don't see anything in Steam's controller that appears to have solved that simple problem.

When verified realities lead us to anger, we must learn to reevaluate our beliefs.
Comments have been disabled for this article.