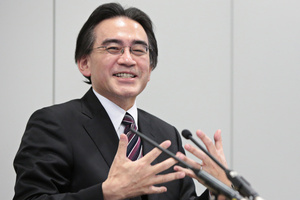 In a sad press release tonight, Nintendo has announced that its CEO and president Satoru Iwata has passed away from a bile duct growth.
He was just 55.

The executive became a director at Nintendo in 2000 and then president in 2002, following Nintendo legend Hiroshi Yamauchi. Previously, he worked as a coder for Nintendo's subsidiary HAL working on games like NES Tournament Golf and Kirby. More recently, he was named CEO of Nintendo America in 2013.

Iwata was instrumental in major hits like the Wii and Nintendo DS/DSi/3DS but more recently the company had run into issues following the flop of the Wii U. Nintendo just announced initiatives to get into mobile and a new console scheduled to launch next year, for which there are still little details.

Despite health issues in the past, his death comes as a serious shock as his ailments were not expected to be terminal and Iwata has been a very visible Nintendo figure over the years, speaking at investor meetings, E3 keynotes and more.

Bummer. What a pity. Condolences to his family.

Just when Ninty seemed to be picking up again judging by some of the new titles.

Shallow or not, I believe that video games are art. Albeit a pretty commercial one. There'd be more to having been the CEO of something like Ninty than just money imo.

Some stories say he just had a "growth" while others say he had cancer. Regardless, too young for someone to go...especially someone who seemed so nice! I never owned a Nintendo product (except for buying a Wii to immediately sell it to someone else), but I still respect the good they have done for video games (I can't resist playing DONKEY KONG on MAME every now and then).

Sure seems he had a blessed life, work in what he had a passion and love for.