Recent headlines | Google, Spotify and many other major websites are all down across the globe 3
AfterDawn > News > Xbox One gamers will be able to stream their games via Windows 10 PCs 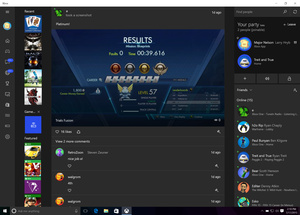 Microsoft has confirmed that an upcoming update for the Xbox One will allow gamers to stream the games via their Windows 10 PCs and tablets.
Reads the post: "This means you can play the great library of games you've built for Xbox One on your Windows 10 PCs when you're not in front of your console. To get started, on your Xbox One console, go to Settings > Preferences > Allow game streaming to other devices and then install the latest version of the Xbox app on your Windows 10 PC or tablet.

Furthermore, the Xbox App on Windows 10 is seeing a significant upgrade adding a number of new features.

See I would like to do the opposite.. Stream my Windows games to my TV through my XBOX One. I much rather play on my 65" TV than on a small monitor but my gaming PC is in my office and not connected to my TV.

I remedy this now by having a modest HTPC connected to my TV and use Steam In-Home streaming from my Gaming PC to my HTPC. Works pretty well that way.

I would move my gaming PC to my living room but it is pretty big and I use it for more than gaming which is why I rather keep it with the dual monitors in the office.

So, basically, we can now stream crappy console-spec games locked at 30fps to our PCs capable of 60fps? What?