Apple Watch sales are promising, but company does not reveal exact figures 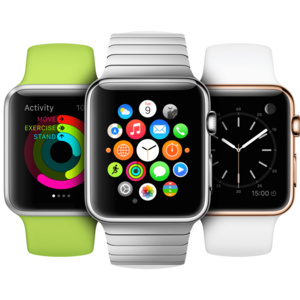 Although the company had already confirmed it would not be releasing exact sales figures for the Apple Watch, the company did leave industry watchers some tidbits during their quarterly earnings.
The company says that "sales in its first nine weeks exceeded those of the iPhone and iPad in their first nine weeks of availability." When the iPad launched, it sold 3 million units in its first 11 weeks, so we can assume that Apple Watch sold at least 2 million units for the quarter.

Additionally, we know that Apple added the Watch to its "Other" sales category, which houses the iPod and also includes accessories like the Apple TV and Beats headphones. That category totaled $1.7 billion in revenue for the Q1 and jumped to $2.64 billion this quarter. Apple was nice enough to confirm that the Watch made up the difference in revenue and then some as iPod sales fell again.

Tim Cook, during the earnings call, had a few things to add:

As you know, we made a decision back in September, several months ago, no to disclose the shipments of the watch. And that was not a matter of not being transparent, it was a matter of not giving the competition insight, on a product that we worked really hard on.

However, let me give you some color, to avoid reaching sort of a wrong conclusion. If you look at the "other products" category and look at the revenue in this category, it would not be an accurate thing to just look at the sequential change or the year-over-year change and assume that were the total watch revenue. Because the aggregate balance of that category both sequentially and year-over-year is shrinking. Obviously iPod is a part of that, but there are other things in there -- accessories and so forth -- that are shrinking.

Secondly, to provide a bit more color. The sales of the Watch did exceed our expectations. And they did so despite supply still trailing demand at the end of the quarter. To give you additional insight, through the end of the quarter, in fact that the Apple Watch sell through was higher than the comparable launch periods of the original iPhone or the original iPad. We were able to do with with having only 680 points of sale. As you probably know, as I had reviewed earlier, the online sales were so great at the beginning, we were not able to feed inventory to our stores until mid-June. And so those points of sale, pretty much, the overwhelming majority of the low number of sales were not there until the last two weeks of the quarter.

And so as I look at all of these things, we feel really great about how we did. Now our objective for the quarter wasn't primarily sales. Beyond the very good news on sales, we're more excited about how the product is positioned for the long term because we're starting a new category. And as I back up and look at this with 8,500 apps, we've already announced the next operating system watchOS 2 -- it will bring native apps, which are going to be killer, to the watch. Even though the store layout was delayed, we learned a lot about the experience. Based on that experience, we're now planning to expand our channel before the holiday. Because we're convinced that the watch is going to be one of the top gifts of the holiday seasons.

How do they do it? How do they make people become so stupid to think that they've bought a decent well made product that will only be updated with very few additions to then make the consumer pay more/again for the same piece of shit. Wake up for goodness sake! Apple users, you are being conned beyond your imagination!

Couldn't you say that about every consumer product in every market. Android does the same thing year in and year out. They all just give consumers incremental changes and pass them off as the next big thing. So jumping on Apple is the easy and convenient thing to do instead of taking the entire electronics market to task. I understand that the easy thing to do is bash big, bad Apple, it is plainly obvious that you are an android user.

Yep, I am an android user, and you're right I could target the electronics market, but the reason why I target Apple is that I've seen many of my friends who own Apple iphones or ipod with busted up screens, why? because of the poor build quality. Mine is only a Motorola and I've had it for over two years. It has gorilla glass as standard, dropped it many times and yet it is still in one piece. Another issue are Apple's updates? did you see how big the last update was? I mean come on! this only makes people think that they have to buy a larger capacity iPhone/pod, and of course you can't simply install an sd card to the iPhone/pod to increase your memory, unlike android. What about the new iPhone 6 and the 'new' charger, completely wiping out the use of older chargers that people may have used on older iphones. I could go and on about this, but I won't because I can't be arsed. In a nutshell Apple are greedy and take the piss out of their consumers, consumers who think they have a great product and will defend it because they spent a stupid amount of money on it.

So you target Apple because your friends can't seem to own delicate electronics without breaking them?? I have seen many Android phones with broken screens also. I am on my 3rd iPhone and have never broken a screen. Actually the only time I've had any problems with one of my iPhone's was when I dov
e into a pool and realized that I had it in my pocket..... But that was MY fault... Not Apples.... And they replaced it for $100 no questions... Which I felt was extremely fair given that it was my fault and I had the 64gig iPhone 5 at the time which was around $600.

I'll give you that the updates are large but I have read that iOS 9 which is coming in a month is only going to be around 1.5 gigs to install... That's about 65% less space than before. So in a month that argument will be moot.

And the "new" lightning charger is great. Much better than the old one or any usb that I have ever used. And I put new in quotes because it is NOT new. I don't consider something that has been out for at least 2-3 years as "new".

So you just stick to your Android phone and it's microSD card.... I'll stick with my nicer and better built "Crapple" environment.