We have more photos of the Android-powered BlackBerry slider phone 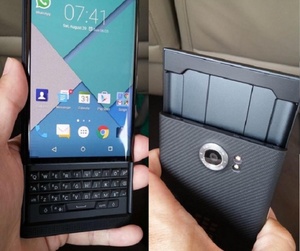 Following last month's HQ renders released by famous leaker @Evleaks (Evan Blass), we now have real photos of BlackBerry's upcoming Android-powered slider phone.
If all the leaks are accurate, the phone will have a full BlackBerry QWERTY keyboard hidden under a sliding touchscreen, reminiscent of the most popular smartphones of yesteryear.

From what we can tell, the phone will have a large speaker grille right on the bottom of the handset, the device will have a microSD slot for expanded storage and a 16MP camera. Codenamed Venice, the device has been rumored to have a Snapdragon 808 processor, a 5.4-inch QHD display and 3GB RAM although those specs are unconfirmed.

Lot of people out there that miss the physical querty keyboard as smart phones have a virtual KB.
Think these may do well depending on the price tag.

I hate virtual keyboards. I have a motorola e and I can't stand texting on it. I'm one of the ones who would love to have a physical keyboard. I could see myself with this device if the price was right.