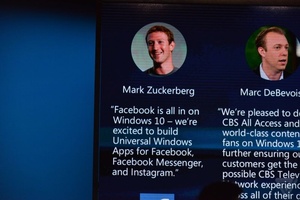 Yesterday, during Microsoft's big event, one smaller piece of news hit that went generally unnoticed but also means big things for Microsoft.
The company has a long stated goal of having developers create universal apps that can run seamlessly across phones, PCs and tablets, but so far there have been very, very few built.

Now, Microsoft has a big developer backing their push for universal apps, with Facebook having created universal apps for Facebook, Instagram and Messenger. "Facebook is all in on Windows 10," read the quote by Mark Zuckerberg.

Instagram is a big deal since there has been only minor updates to the app for Windows Phone over the last two years and the app still doesn't have the ability to upload video.