Recent headlines | Google, Spotify and many other major websites are all down across the globe 3
AfterDawn > News > OnePlus X to be unveiled on October 29th

OnePlus X to be unveiled on October 29th 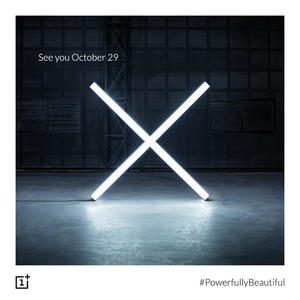 Chinese smartphone OEM OnePlus has teased a new event on October 29th where the company will reveal their OnePlus X handset.
Co-founder Carl Pei said back in August that OnePlus would release a second phone before the end of the year, following the recent release of the OnePlus Two.

There have been a few minor leaks of late for the new X, including the North American FCC filing that shows off a 5.5-inch display with a metal frame and a micro-USB port.

The OnePlus X will likely be the cheaper of the company's two new devices, which likely means a $199 price tag, unlocked.

Tweet
Tags: smartphone OnePlus X
<BlackBerry needs to sell 5 million handsets a year or there may not be hardware in the future >Aurous gets sued by major labels just 72 hours after launch
Previous Next
Comments have been disabled for this article.