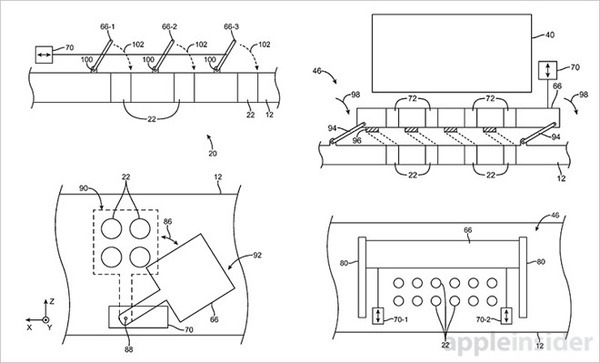 While most of the US was concentrating yesterday on turkey and pumpkin pie the U.S. Patent and Trademark Office published a patent by Apple, Apple Insider reports. This patent appears to be a way to protect devices from external liquids and dirt.
In the patent Apple explains how devices could prevent water and other things from getting to vulnerable parts such as microphone or the speaker. A electronically controlled set of shutters or louvers would close the openings automatically when not in use.

The patent included several pictures (above) of proposed applications that feature different kinds of means of shutting a variety of openings. The patent suggests that this could be even used to protect the headphone jack and the card readers which usually require a clumsy hatch of some kind.

Will the patent make its way to the next generation of Apple products, that we'll have to see. But even if it doesn't Apple clearly wants to make their products more durable – which certainly hasn't been their strong suit in the past.
Tweet
Tags: Apple iPhone Apple patent
<Raspberry Pi introduces the cheapest and tiniest computer, Zero >Sony PlayStation 4 hits 30 million units sold
Previous Next
Comments have been disabled for this article.