To the surprise of some iPhone users, Apple has started pushing aggressive advertisement to App Store users with an older iPhone models. A full screen popup ad is a new strategy in Apple's arsenal.
The popup ad (shown below) opens up as the first thing when opening the App Store on iPhone. It suggests an upgrade to the new "ridiculously powerful" iPhone 6s.

Apple has yet to comment on this advertisement but it appears that it is directed at iPhone users with models that predate iPhone 6. There's no word on what markets are affected by this but we've heard reports from the US and the UK, as with the tweet below.

This might be the first time that Apple uses App Store to promote its new devices but it certainly isn't the first time Apple is cross-promoting its other products on App Store. And it is fairly certain that the effect of this type of advertisement has been extensively discussed in Cupertino, and that the positives (sales) outweigh the negative feedback. 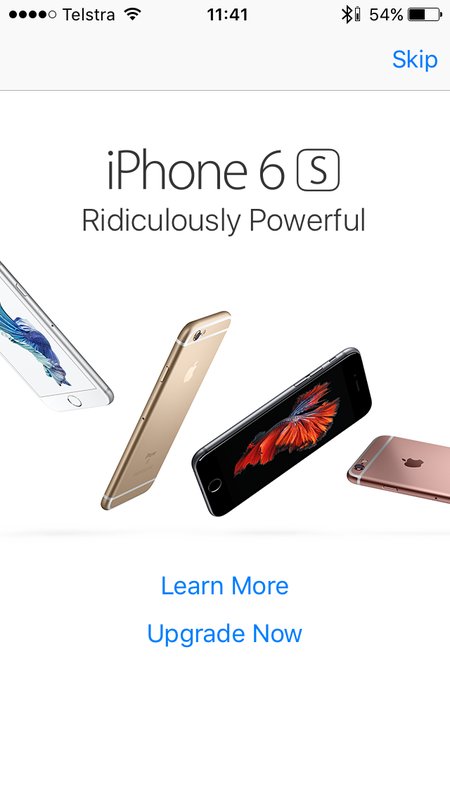 #apple @AppStore just gave me a full screen ad for a new iPhone, and so becomes native, non-removable adware. Not cool.

Thank god I don't use apple products but if I did I would be jailbreaking that phone and installing the Alternative store app. Forcing invasive ads on me while I'm getting ready to give you money is a good way to lose it.

The article title makes it sound like it's randomly popping up ads during regular phone use. I don't think a suggestion entering the App Store app is particularly horrendous.