Recent headlines | End of an era: iPod discontinued - the device that revolutionized music industry
AfterDawn > News > 'Game of Thrones' crowned the most pirated show for 2015

'Game of Thrones' crowned the most pirated show for 2015

According to TorrentFreak, 'Game of Thrones' is the most pirated TV show for the fourth year running, followed by 'The Walking Dead.'
The site estimates 14.4 million downloads via public torrent trackers for the 2015 season finale, handily beating out the competition. By comparison, the site estimates that 8.1 million viewers watched the finale on TV or via HBO Go or HBO Now.

TF bases their figures on several sources but does not go too much in-depth into how they are calculated. One thing to note is that streaming and cyberlocker downloads are not included so these numbers are possibly very low compared to real figures. 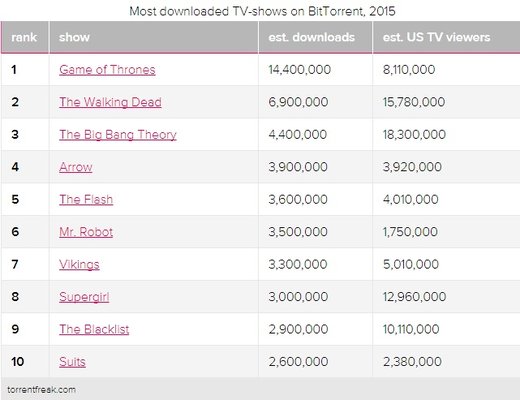