Microsoft says Windows 10 is now on over 200 million devices 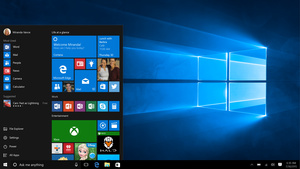 In just a few months since its release, Microsoft's latest operating system is now powering over 200 million devices.
The software giant announced today that Windows 10 installations are growing rapidly and at a far faster pace than previous iterations of Windows although that is not too hard to explain given that Windows 10 is free for most consumers and Microsoft pushes the OS to your computer even if you don't want it.

Regardless, the figures are impressive. Adds Microsoft: "In fact, Windows 10 continues to be on the fastest growth trajectory of any version of Windows – ever – outpacing Windows 7 by nearly 140% and Windows 8 by nearly 400%.

It's not far-fetched and this is likely world-wide. Not sure though.

No doubt it's true, but really nothing to crow about...I mean, it's basically free for anyone that's bought a computer in the last 6-7 years (Win7).

Considering Microsoft forced a large number of Windows users to upgrade, their numbers mean diddly-squat to me.

Exactly, Bozo. Too many clients got this forced on them without them knowing, and too many others didn't realize they had a choice in the matter. These numbers are fudged.

Kind of my sentiment about windoZe 10, wonder how many people are running it by choice or was it forced on them.

What i'm still amazed by is the amount of complaints, or really the lack of them. about the stuff in Win10. Such as EVERYTHING you do is tracked and monitored. There is a key logger build in tracking you keystrokes, if any of us thought about and released software that did what Win10, we'd definitely would be investigated for illegal activity and more than likely found guilty and serve time for such offenses.

Well, unlike M$, you wouldn't likely to be doing so at the behest of the NSA and FBI ^^'.