Microsoft drops price of Xbox One ahead of E3 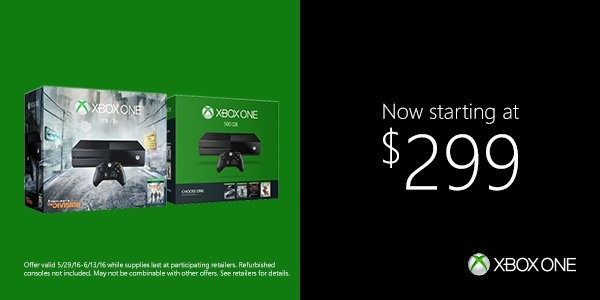 Microsoft has announced a price cut on the Xbox One console ahead of next month's E3 event, suggesting the long-rumored "Xbox 1.5" could be on the way.
Every Xbox One bundle now has a $50 discount until June 13th, the start of E3, although there is speculation the price drop will be permanent.

The rumored Xbox 1.5 will be 40 percent lighter than the current model, following the previous generation's model of offering "slim" consoles halfway through the life cycle of the console.

Tweet
Tags: console slim Microsoft Xbox One
<Windows 10 upgrade woes sends woman to Microsoft offices for help >Samsung's new stamp sized SSD could be heading to next MacBook
Previous Next
Comments have been disabled for this article.