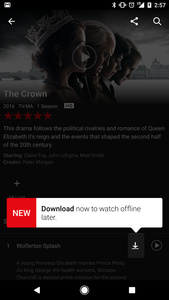 Netflix unveiled its perhaps most awaited feature ever late November last year. Offline viewing was added for mobile devices so you and I could limit the amount of mobile data we use.
Whether it was because of the cost or the sluggishness of mobile data the feature was definitely welcome but one could easily argue that there was a lot of use for the same feature even in PCs. Now it seems that Netflix has agreed and released an update that brings downloading to PCs too.

According to Windows Central, Netflix has released an update that adds the download option to shows and movies right where it is in the mobile app. This only is found on the Windows 10 app, so if you are using the web app or any other desktop enabled app you are likely out of luck.

At this point most of the downloadable content is said to be Netflix Originals but this should change soon as Netflix expands their support and closes more extensive content deals.

As of writing this my Netflix app from the Windows Store is still at v6.18.89 which does not include the offline viewing function, so you might have to wait a while depending on the region, or luck for all we know. You can check the likes of Bojack Horseman to see if you see the little download icon next to every episode.

Netflix has not announced anything officially.

This will no doubt be accompanied by a self-destruct timeline too so they can't be kept indefinitely.