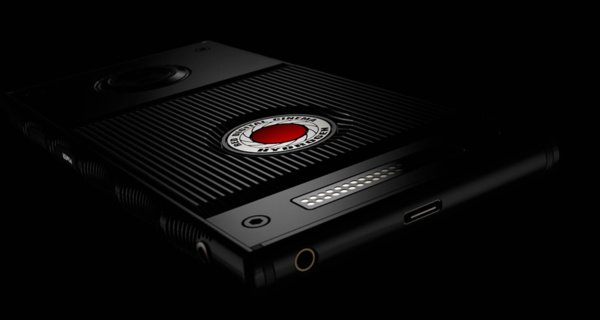 The world is full of smartphone manufacturers. It seems that almost every single consumer electronics company has made an Android phone but none of them are quite as special as Hydrogen One, says camera manufacturer RED.
If you are a professional videographer you very likely know the company RED. It makes high quality sensors and modular camera setups but now also apparently smartphones.

However, RED's approach isn't simply to plop out another Android clone that no one will remember in a month. The phone that they call Hydrogen One is said to have a 5.7 inch, no glasses needed holographic display, whatever that means, and it will be able to produce 3D, VR, AR and RED's own "4-view" content. It also can convert simple stereo sound into so-called multi-dimensional audio.

The pins at the bottom of the picture also seem to confirm what has been revealed by RED's patents that the phone is also modular. You'll be able to attach modifications in the same way as with Moto Mods and one can only imagine what type of camera addons RED might have planned.

All this seems fairly crazy, right? Well, at this point we only really have their word for it because the company hasn't revealed much at all about the device. There's really just one picture, the aforementioned details about its capabilities, and means to pre-order the device.

Oh, and that brings us to the price. The starting price for the Hydrogen One is $1195, that's called the Aluminum version. If you want the Titanium version you'll have to shell out an extra $400.

Red Hydrogen One is expected to ship in Q1 2018 but I'd be surprised if we don't hear more about it before that.
Tweet
Tags: red RED Hydrogen One
<Samsung's upcoming standalone VR headset in pictures >How much would you be willing to pay for an iPhone?
Previous Next

I'm aware Red is an established company but the way they are putting forth this campaign, it SCREAMS, "Scam!" at the top of its lungs. Seriously, preorders before real specs? Hell no!

We had a Sharp prototype for a 3D mini tablet (WAY before the iPhone) in 2003-2004, This was the days of the final Palm Pilots and Sony Vaio! Turns out this ran LINUX, and had a lenticular display (i.e. amped version of what the Nintendo 3DS is/was)

You could place this on a table top and watch an Anime 3D movie floating above the screen. From any angle!

This was truly the same (real though) effect of the 3D chess in the original Star Wars, or the Princess Leah "ObiWan help me" thing. Sadly unlike the movie, No one threatened to rip my arm off, so the effect was not as powerful!

At the time (and still) it was totally unprecedented in commercial products.

With the advancements in processing and display technology and sensors available, it is entirely possible that this company has indeed resurrected that concept (or Rediscovered it)

Best of my knowledge, only two prototypes from Sharp ever existed, one in Japan, the other with Sharp USA. I had that one for about a week.

Still consider that one of the coolest bits of tech I have used (prior to HoloLens)! Which we were fortunate enough to get in on last year. And still find the most popular of all the 3D things we have in the lab.

The pocket 3D is a very very cool thing.

This will definitely be a big draw for "some" games and for face to face communication potentially.

BUT stop and think about what the military has though!! Scary Scary!!

The Sharp "thing" (never had a name for it from them) was sort of like holding the future in your hand! HAH

Pardon? My problem is with the complete lack of specs: Processor, RAM, internal storage, lack/presence of an SD card slot, and so on are important statistics, far more so than the display they're hawking.