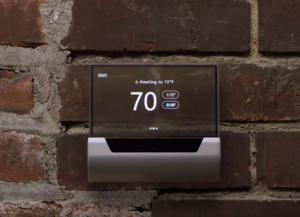 Smartphones are still perhaps the number one technology people focus on but it seems pretty clear that it might not be as exciting as it once was. Perhaps we're wrong but there seems to be some stagnation, or maturity, in the field.
This gives more room for technologies that have much more to gain in terms of functionality in shorter time span. One of the things that has been talked for years but hasn't quite managed to get the ball rolling in the past years is Internet of Things.

IoT, or more specifically Smart Home applications are getting there, though. Introduction of Alexa and supported Smart Home devices, Google Home, and even Apple's HomePod are making the technology more accessible and way more interesting.

One player that might be a big one in the future is Microsoft. The company's Windows 10 IoT Core operating system could be the future of Smart Home applications and devices. To demonstrate this Microsoft has released a new video showcasing Johnson Controls smart thermostat called GLAS.

The thermostat has a see-though touchscreen display, it monitors the air quality and temperature, and adjusts automatically or from user input. As it runs of Windows 10 IoT Core, it also supports voice assistant Cortana.

Microsoft or Johnson Controls have not revealed any details on when you can buy it or how much it costs.

Ummmmm...didn't Microsoft basically kill Windows phone less than a week ago? I understand the difference...but we are talking about a web-connected device from a company that will give fewer than 10 years of security updates, possibly fewer than 5, which will be used until it fails, the building is torn down, or there is a major renovation. People are still using thermostats with mercury switches inside after all. Why would Microsoft, a company that just gave up on this segment to focus on their core business, release something like this? And why would anyone buy it knowing that the lifecycle will be shorter than the run of most TV shows?

They should call it the blue screen thermostat.....

True enough, but you can say the same thing about the Nest thermostat. Far too many of these IoT devices are tethered to servers, and will instantly fail if those servers are no longer maintained; it's a serious problem.

Convenience comes at the cost of security - not entirely sure it's worth the risk.

Imagine getting a blue screen on the hottest day of the year.....

Does my home owner's insurance cover the cost of re-plumbing my entire house if my thermostat gets a BSOD when it's 20 below zero and I'm out of town for the weekend?