Top apps in the United States in Summer 2017

comScore has released its latest chart showing which apps are the most used ones in the United States. As the American mobile phone culture differs quite a lot from other Western countries, the chart is quite interesting one.
First and foremost, the difference between the U.S. mobile phone usage and, say, European one, is the fact that iPhone has significantly higher market share in the U.S. than it has in most other countries - over 40 percent according to one statistic. 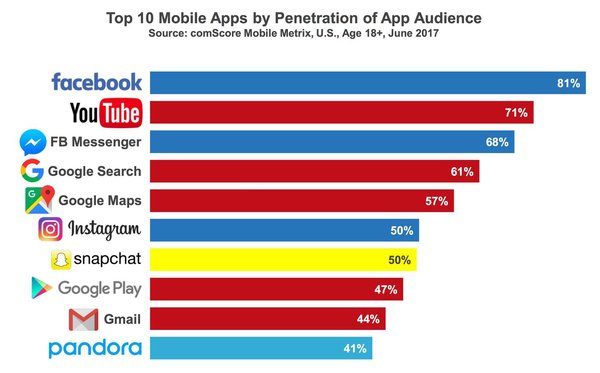 most popular apps in the United States, Summer 2017

The interesting bits on the list are these two oddities: While rest of the world has Spotify on most such charts, its competitor Pandora replaces the Swedish music giant in the American list. Another one is the absence of Facebook's WhatsApp - the de facto communication app in most countries.
Tweet
Tags: Google Facebook Android iOS Mobile Apps
<Finnish court: Pirate Bay founders must pay over 400'000 euros to copyright owners >PlayStation VR gets a price cut
Previous Next

Ugh.........Facebook can be excluded as an "app" in the practical sense as it's a shit service used sadly by 1/6th of the world so that's kinda "hand-in-glove"

FB Messenger, really?? really?? This is nesting, FB messenger should be a part of the FB app........PERIOD. In principle alone this should be excluded.

Google Search and Maps are preinstalled and can't be removed so declaring them as "Top Used Apps in the US" is like declaring that IE is the most "employed" browser in the world. It's part of the ecosystem so of course it's a "top app".

Google Play isn't an F'ing app! While it's coded the same way, Google Play is an OUTLET to getting more apps. More a medium rather than an independently function app. Plus it forces us to have it to play most games. Ridiculous!

Now, Instagram and SnapChat and Pandora, those are traditional "apps".

This poll is, was and will always be a stupid one.

The god of Islam, Allah, is not a relational being. In fact, we just looked at how Islam teaches that Allah is unknowable. If you can't know someone, certainly you can't have a relationship with that person.

You would think that Google Play and the Apple Play store would add up to about 100% between them...maybe as low as 98% when including Windows devices? But google play got 47% and the Apple store is obviously under 40% since it isn't on the list. Any survey that claims that fewer than 87% of smart phone users have used the market apps yet that 81% all have a certain app that uses the markets to update itself is clearly broken. The only 'news' here is that Statista does a terrible job and doesn't even mind releasing stats when they are clearly wrong.