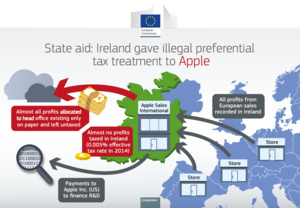 Apple, like most companies, do not like taxes. In fact, it tries to avoid them in myriad of ways, but mostly within legal boundaries. However, not always can even the world's highest valued company get away with their tax schemes.
One of these happened for years between Apple and Ireland. The EU member state offered Apple special protections against taxes with agreements that angered the European Commission.

According to EU, Ireland's tax agreement with Apple is considered state aid which is illegal for a EU member state. Both Apple and Ireland have been against EU's decision, and Ireland has refused, or been very slow in the least, to charge Apple the taxes.

Lately EU has been pressuring Ireland to collect the $15 billion in taxes that Apple owes them, even to the extent that it has threatened to sue Ireland. Meanwhile, Apple has been moving their assets to other tax havens, at least to the island of Jersey, Paradise Papers revealed earlier this year – totally unrelated, right?

Well, now Ireland and Apple have agreed on terms to make sure taxes are paid appropriately. Ireland will start collecting the 13 billion euros in taxes from New Year onwards. However, European Commission is still holding on to the hammer of justice as long as there are still unpaid taxes, and will take Ireland to court if it stops collecting the 13 billion euros.
Tweet
Tags: taxes tax avoidance Apple Ireland European Union European Commission
<Netflix will bring House of Cards back for one last hurrah – without Kevin Spacey >Beloved VLC has updated its Android offering
Previous Next

No matter.Ireland can give the fingers to the EU after brexit & tell em exactly where they can shove it.

what makes you think that as Ireland is not part of the UK just Northern Ireland.

Wasn't aware it wasn't in with the UK

"However, it was not until 1949 that the state was declared, officially, to be the Republic of Ireland."
https://en.wikipedia.org/wiki/Ireland
now you do.

It's a shame that my country's (US) gov't doesn't have the balls to close these offshore loopholes like Ireland did......

They can't/won't close them off most probably due to them all being in the corporations pockets in the form of all the campaign contributions (aka i suspect as "having the senators ear").Oddly enough that never used to be allowed.It needs to be outlawed again.Trump was voted in because of the bs you lot have to deal with.Unfortunately it seems trump is also part of the rotten system.Evidenced by the recent xmas bonus to corps in the form of a massive tax break.Which will more than likely be born by those that can least afford it (the poor)