Stranger Things: Netflix sued for copyright infringement over photograph use 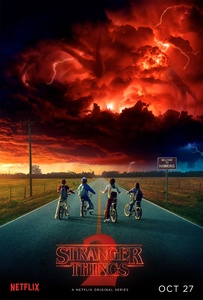 Netflix has been hit with a lawsuit by a photographer over the alleged unauthorized use of a supercell photograph in Stranger Things and How It Ends.
Sean R. Heavey is a photographer from Montana. In 2010, he tracked a storm for hours as it crossed into Montana, taking four vertical panoramic photos together into one photo. The resulting storm cell image has been used in publications all over the world.

Heavey took to Facebook to show the following comparison and ask if others thought the cloud formation used in Stranger Things is his photograph.

Additionally, in the Netflix film "How it Ends", the same photo seems to have been used for a supercell that hovers above the characters.

Netflix had previously responded to Mr. Heavey's complaint. "The only similarity that exists between the Artwork and Mr. Heavey's photograph, The Mothership (the 'Photo'), is the use of similar cloud formations. Copyright law, however, does not protect objects as they appear in nature," Netflix attorney Jarin Jackson wrote.

The lawsuit, filed in the U.S. District Court in Great Falls, seeks damages, legal fees and the prohibition of the use of the image by Netflix again without expressed permission.

Similar ? that's funny right there. It's the same dam picture. What are the chances of someone else coming up with the same pic taken by them or just thought of by imagination. Me thinks 0

As a professional Photographer, this Photograph is identical in all respects to the original shown above, and NetFlix should have approached the author prior to reusing it in any way, the two photographs can be compared by Chromatography, and have the Original, and any copy being identical in all ways, even down to the date , time, direction, and location.

Other then they are both storms that are roundish in shape I do not see it the same at all. The real picture is really cool looking though.

Anyone can see they are the identical same ......

It IS the same image...Netflix "dressed" it up to suit their production. You can tell by the scud detail in the supercell pic that it's the same image.