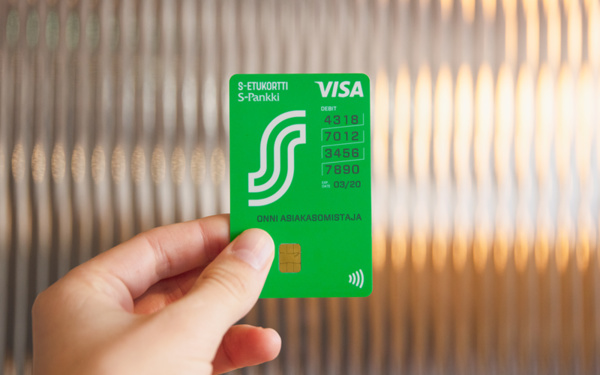 The old magnetic strip of debit and credit cards is nowadays rarely used in most of the Western countries, having been mostly replaced by either contactless payments or chip-and-pin payments. Finnish bank S-Pankki has now introduced a line of debit and credit cards that are designed vertically rather than horizontally.
Reasoning behind the design change is that consumers mostly see their cards positioned vertically - either when stored with their phone flip-covers or when paid with chip-and-pin terminals.

The card itself is still the same, standard-sized bank card we all know, but the all the graphical design elements - including the numbers on the card - are positioned so that they're meant to be read when the card is positioned vertically.

S-Pankki is not the first one to do the switch, as some banks have introduced the portrait cards in past two years, too, such as Sterling Bank in the UK. But S-Pankki is one of the largest banks in Finland, whereas most other banks around the world to introduce portrait cards have been "new banks" rather than traditional, big banks.

Traditional 16 digit card number is split into four lines, each having four numbers. Card still has the old, black magnetic strip so the card can still be used in countries where chip-and-pin payments and contactless payments aren't the norm. More info from S-Pankki website (in Finnish).
Tweet
Tags: Banks Finland
<Intel's 5G failure cost Apple $4.5 billion, Qualcomm to collect >Huawei overtakes iPhone, Samsung is next
Previous Next
Comments have been disabled for this article.