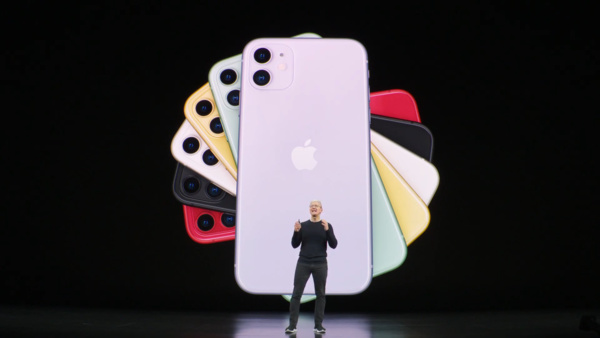 Apple has today announced the new iPhone 11 in three different forms at the Steve Jobs Theater in Cupertino, Ca.
The cheapest of the bunch is the regular iPhone 11, which is actually the successor to last year's iPhone XR, not the XS.

The new iPhone 11 improves upon the cameras most importantly. In the back you'll now get two cameras instead of one and even the Facetime camera has been upgraded.

The new addition is a 120 degree wide angle camera next to the regular 12 megapixel shooter. The regular camera offers a f/1.8 and optical image stabilization.

Additionally, Apple announced the new Night Mode which is their version of Google's Night Sight that makes very dark conditions light up.

As you might imagine, there's also a new A13 Bionic chip underneath it all. It makes everything run even smoother and, better yet, even the battery life has been improved.

Prices start at $699 and the the phone will be available on September 20th with pre-orders starting this Friday.
Tweet
Tags: iPhone 11
<Apple is unveiling today a tracking device, and it's more precise than competition >Apple's new flagship is the iPhone 11 Pro
Previous Next
Comments have been disabled for this article.