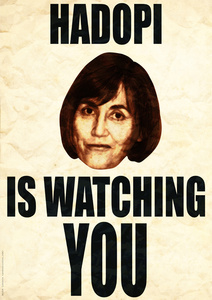 The French high authority HADOPI, which was put in place to oversee the country's recently passed "three strikes" anti-piracy laws has a new problem on its hands; phishers and scammers using the authority's name to trick people into giving up personal information.
The group is allowed to issue sanctions and fines to Internet users accused of piracy, with a "third strike" meaning disconnection from the Web, and a blacklisting.

E-mails, purportedly being sent from HADOPI, have been hitting thousands of inboxes this week, all claiming that the recipient has been accused of copyright violations.

The accused are then pushed to a website to pay off their fine, which leads to phishers stealing their personal info along with the money.

HADOPI says it will begin sending out the first real violation letters in the coming months.

Like I didn't see this comming(sarcasm) I mean honestly did any country who pass this kind of Draconian copyright law this think wouldn't happen? Regardless if people"Infringe Copyright" or not will get confused over a fake or real copyright notice, If you think bout it...this will continue to grow even when Hadopi starts sending those out.

If Acta is somehow passed....and this happens globally, I'll be paranoid and scared..not going to lie.

It's a dismal fact that government cannot compete with organized criminals.

Originally posted by attar: It's a dismal fact that government cannot compete with organized criminals.

Why can't they compete with themselves?
44.9.2010 11:02
Mysttic
Send private message to this user
Senior Member

Quote:Why can't they compete with themselves?

They do, but its more fun to compete with others, that way it gets the mass public eye off them.
54.9.2010 23:03
blueboy09
Send private message to this user
Senior Member

Quote:Why can't they compete with themselves?

They do, but its more fun to compete with others, that way it gets the mass public eye off them.

Think about it. It allow them (phisers) to do their dirty work behind the scenes. It's the perfect dirty scheme and the worst part is that it's working plus most of these guys can't get caught in time and low and behold guess who has your money.

Chance prepares the favored mind. Look up once in a while and you might learn something. - BLUEBOY
65.9.2010 02:28
slickwill
Send private message to this user
Member

Is the photo in the article suppose to be a parody of the poster "Big Brother is Watching You!" from the 1984 movie 1984 (based of George Orwell's Book).

Now that I have looked around, the picture has turned out to be a parody.

I dont understand something


Quote:The group is allowed to issue sanctions and fines to Internet users accused of piracy,

correct me if im wrong but shouldn't it be people found guilty of internet piracy???
technically me or anyone else in a free speech country can accuse anyone of anything.
custom built gaming pc from early 2010,ps2 with 15 games all original,ps3 500gbs with 5 games all original,yamaha amp and 5.1channel surround sound speakers,46inch sony lcd smart tv.
87.9.2010 01:54
borhan9
Send private message to this user
AfterDawn Addict

LOL...i bet RIAA is involved...they're the biggest crooks out there...