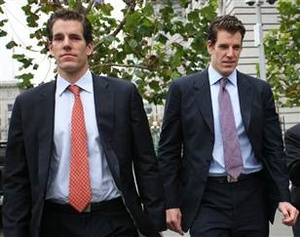 Seven years after they first filed suit against Mark Zuckerberg and Facebook, it seems the legal drama between Cameron and Tyler Winklevoss and the social networking giant is coming to an end.
The twins have dropped their appeal and settled the case, two months after a judge bluntly told them they must accept the deal.

Along with Harvard classmate, Divya Narendra, the twins filed suit against Facebook in 2004 alleging that the concept for Facebook was stolen from them and their early work on HarvardConnection.

In 2008, Facebook agreed to settle, giving the trio a deal worth $65 million ($45 million in stock), with the majority in Facebook stock. At the time, the group was given $45 million in stock with Facebook valued at $15 billion. The twins filed suit again last year claiming Facebook had internally given itself a $3.7 billion valuation, and so the group was conned out of many more shares in the company.

The federal Judge, Alex Kozinski, killed the appeal in April:

At some point, litigation must come to an end. That point has now been reached. The Winklevosses are not the first parties bested by a competitor who then seek to gain through litigation what they were unable to achieve in the marketplace. They made a deal that appears quite favorable in light of recent market activity.

Regardless, with Facebook now valued at $100 billion the Winklevoss/Narendra shares in Facebook are worth just over $300 million, an appreciation of 660 percent in just three years.
Tweet
Tags: Facebook Lawsuit Winklevoss Appeal Dropped
<Facebook adds Netflix CEO Hastings to Board of Directors >'Harry Potter' e-books are finally official
Previous Next

All I can say:


AfterDawn News
AfterDawn Guides
One of the largest collections of software on the Web: AfterDawn Software Section
223.6.2011 14:27
LordRuss
Send private message to this user
Senior Member

I'm not familiar with the back story, but I tend to agree still... 20 something and retired... never really worked a day in their lives and originally entitled? Greed.

To think I squabble over the last cookie in the jar. No literally. The wife ate every last damned one of them...

Rich people are never happy with any amount of money they have or don't have.

Originally posted by ntense69: Rich people are never happy with any amount of money they have or don't have.

You know, in a scary way, that actually makes sense... Yet, to speak of it in a social setting would to be like a child dancing in the center of his classroom with a fresh fecal log; that disgust on all the other classmates? That's how all the other elitists behave. Talk about contradictions.

You must kill her cookie stealing ass!
Whats next?! Using the last of the toilet paper!? YOu have to stop this before its gets crazy!

Elitists? The people smart enough to figure out how society works? take advantage of it and sit at the top while you slave at the bottom?
Those elitists?
Emulation rather than jealous whining is whats needed, bro.
One thing to take pride in your own work... sniveling at the people smart enough to skip the grunt work and go str8 for the cream..sounds womanish...man up.

Originally posted by chevnoire: Elitists? The people smart enough to figure out how society works? take advantage of it and sit at the top while you slave at the bottom?
Those elitists?
Emulation rather than jealous whining is whats needed, bro.
One thing to take pride in your own work... sniveling at the people smart enough to skip the grunt work and go str8 for the cream..sounds womanish...man up.

OK, I can see your point, but ponder me this... Smarts is a matter of perspective chevnoire, you may know infinitely more about cars than I do, but I know legions about rock & roll sound reinforcement systems. It doesn't make us lesser people. Take these twins... Their rich. They wanted to be richer off another guys hard work & having done nothing themselves but having come up with an idea. They went & got lawyers and then cried for 5-6 years till they basically got what they wanted.

That's not how society works, it's how 'law' works & if you can buy enough law you can get the payoff. It's now called the Legal Lottery & even the judicial system is getting tired of it. That's why the judge shut it down. So yeah, the two plebes are elitists.

And yet I feel you wouldn't still feel victorious for them if that were your hard work? Or is this something 'you' really want to spend your life trying to obtain? Years spent in an Ivy League school with cob-assed kids so you can find that one in a million chance to screw over a buddy for millions of dollars? Not exactly something I want to emulate.

"Imitation is the sincerest form of flattery." Charles Caleb Colton, and your right, but there are many more worthy people out there. I was in the R&R and movie industry, the military and a professional artist/photographer, frankly, I'm too old to care about the antics of a whining pair of kids in New York who have yet to know what a broken down body has in store for them. You indicated I was 'whining' about my position in the food chain of life & the cards I was dealt. Might you take another look at these two guys & reassess to the tune of $65 million (as I didn't get anything, how about your cut), who the biggest whiner really was.

I took pictures, women and bullets... I can't answer for you, but I damn sure know those limp candle sticks didn't do anything close, so... I think I've done my "manning up"...
http://onlyinrussellsworld.blogspot.com
924.6.2011 20:18
oappi
Inactive

If the facebook movie had any reality behind it i would say they got screwed, but seriously if they got 300 million out of it i would think thats good settlement. I mean facebook had quit different market view since their solution was supposed to be "exclusive" while facebooks idea was controlled grow. php/mysql code might have been very similar if he had done page for the twins as he agreed and not just say he is going to do that and when he launched he´s own he told that their idea had technical difficulties... so yeah Zuckerberg is an asshole, but seriosly 300 million.... not quiet $100 billion, but there wasn't any guarantee that they would have succeeded...

I'm not familiar with what the twin's risk was with the business venture, but given what little interest I have with the story & the nature of elitist whining involved, in all honesty, the risk to pay-off at the moment seems to be a pretty good winner to me.

To do further whining & continued out pouring of finances would seem to further gamble on everything. Going by your information, Zuck was the muscle & the twins were the good idea bomb. Zuck must have gotten tired of building the bombs & when it came time for the twins to build their final cash cow it really honestly just wasn't going to work. That's the cards your dealt.

If their so sold on their idea, they should take the whine crackers that the judge "forced" onto them & get another programmer to tell them the same story so they'll stop their BS games & get on with life.

But I'm just an old commoner... What would I know, right?


http://onlyinrussellsworld.blogspot.com
Comments have been disabled for this article.