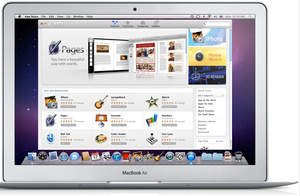 Apple has just announced that the 100 millionth app has been downloaded from their Mac App Store, 11 months after launch.
The store, which launched on January 6th, sold 1 million apps in its first day of availability and has seen a fast pace since.

While the number is large, by comparison the iOS App Store hit 100 million downloads in 54 days and is now above 15 billion downloaded.

There will be no discounted apps from these lames, of course...

Originally posted by Morreale: There will be no discounted apps from these lames, of course...

Slightly different for a PC app store. You cant just sell them for the price of a gumball in an already small market. Even the bare minimum for microsoft's windows store will be a buck-50.
"Cable thief is a victimless crime."
Comments have been disabled for this article.