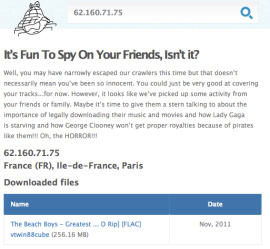 Last week we reported on the launch of Russian-based YouHaveDownloaded.com, which logs public torrent downloads. This week, it appears someone in the home of French President Nicholas Sarkozy is a pirate.
Youhavedownloaded.com is a website setup to show what files have been downloaded using BitTorrent trackers by a specific IP address. The site claims to have almost 53 million "users" in its database, from 113,200 tracked torrents containing almost 2 million files.

When you visit the website, it will check you IP address automatically and present you with files it knows you downloaded. If it doesn't have your IP address in its database, then it will simply say, "Hi. We have no records on you." You can search any IP address, torrent hash or filename for results, or you can snoop on randomly-presented IP addresses that are in the database.

Sarkozy is a notable proponent of anti-piracy legislation and notably wanted to begin the infamous "three strikes" policy in France where 3-time pirates get banned from the Internet.

Sarkozy's residence at Elysee Palace, had many downloads connected to it, including "The Tower Heist," "Change-Up," "Arthur Christmas" and "The Beach Boys Greatest Hits" album.

As my wife used to say, "that's different!" like she is exempt from rules and regulations Joe Sixpack has to follow.

Perhaps Mr. Sarkozy should have his internet disconnected for one year like other pirates....

I'm surprised he hasn't heard of using PeerGuardian or PeerBlock but, then again, you can't fix STUPID.

Originally posted by ivymike: I'm surprised he hasn't heard of using PeerGuardian or PeerBlock but, then again, you can't fix STUPID.

Or maybe he does not believe in them just like many people. First, how do we know the IPs on the list are actually linked to the likes of the MPAA? Secondly, any one can add IPs to the list. Third I know for a fact the lists are full of false positives. For example the server I am on, has an IP that is blocked by these apps. It claims to be an old emule server, but there is nothing harmful on the site/server. Third, people have dynamic IPs. There IP is constantly changing so how do you block them effectively? By the time an IP gets in the list, it may belong to a normal citizen like you or I. Fourth, from what I understand, the app does not block the IP from connecting to your IP, rather it will block the IP from gathering data from you. If that is the case, they found your IP in a swarm and you are now guilty of piracy because your IP was in the swarm even though they received no data from your IP. The list goes on. If the false sense of security makes you sleep better, go for it, but it does more harm then good. Sounds like you need to do some research. I will give you a link to start you off: http://neuron2neuron.blogspot.com/2006/...balderdash.html


Now as for the story,with all due respect Mr. Yoskowitz, it disappoints me to see this garbage printed on AD, just like I was disappointed in TorrentFreak for reporting on the Fox,NBC, and Sony story. If you are going to print this, I think you at least need to make it clear this is alleged. As you know, most Internet connections utilize a dynamic IP. So for all you know, this IP used to belong to some low level soldier on an military base that downloaded some music over an ISP connection in his dorm/apartment before belonging to President Sarkozy, if it ever belonged to him in the first place. As it said in the TF article that brought Youhavedownloaded.com to fame, if something shows up in the list, and you know you have not downloaded it, then some one who previously had your IP did download it.

Originally posted by ivymike: I'm surprised he hasn't heard of using PeerGuardian or PeerBlock but, then again, you can't fix STUPID.

Ok, but what if his neighbor is connecting to his router? Unless they take the physical computer and check the computer's IP then there isn't a way to prove the computer was actually in the house of the president right? Or am I wrong on this?

Originally posted by dab0ne: Ok, but what if his neighbor is connecting to his router? Unless they take the physical computer and check the computer's IP then there isn't a way to prove the computer was actually in the house of the president right? Or am I wrong on this?

How about if you use a Proxy server?
I do for websites I'm not comfortable with.

Since I don't use Torrents I have no idea how they work.

Originally posted by dab0ne: Ok, but what if his neighbor is connecting to his router? Unless they take the physical computer and check the computer's IP then there isn't a way to prove the computer was actually in the house of the president right? Or am I wrong on this?

By the rules that he pushed, then he is still liable.

Personally I think that the people who enact laws against popular opinion should face much more severe punishments when they break these laws. A 1 year ban isn't good enough; he should be banned from using the internet for life.

Using an IP address to track torrents aren't going to identify anyone. If you know the hacking circles, people can get your IP to look like its doing just about anything. the more advanced hackers find anyone with a quick internet connection and can use their IP or even computer as a server to upload and distribute without the owner ever knowing.

IMPORTANT: If you hate Sony for being so corrupt, copy this image into your signature too!
Comments have been disabled for this article.