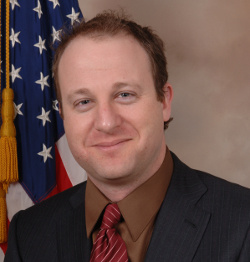 One of the biggest reasons politicians around the world feel comfortable crafting anti-piracy legislation which relies on restricting the Internet itself is a lack of leaders who actually understand the technology they seek to regulate.
Nowhere has this been more evident than in the House Judiciary Committee hearing over SOPA last month. During the hearing, Iowa Representative Steve King actually admitted (via Twitter) that he wasn't even paying attention.

Representative Jared Polis, representing Colorado's 2nd District, is perhaps the best example of someone who actually does understand tech issues. And not just in a general way from researching it, but from actual first hand experience.

Before entering politics, Polis was a successful Internet entrepeneur who founded multiple companies, including online florist ProFlowers. He is also, apparently, an avid online gamer. He recently joined a discussion on the League of Legends community forum about SOPA and PIPA to urge fellow gamers to take action.

Hi, this is Congressman Jared Polis of Colorado. As a member of the League of Legends community (partial to Anivia and Maokai), and as someone who made his living as an Internet entrepreneur before being elected to Congress, I?m greatly concerned about the future of the Internet and gaming if Congress doesn't wake up. You may have heard that Congress is currently considering a bill called the Stop Online Piracy Act, or SOPA. While SOPA has a ton of problems, there are some significant issues that I thought fellow gamers might want to know about.

I?m particularly concerned that SOPA might stifle the kind of innovation that brings us games we love, such as LoL. The bill makes it far too easy for angry competitors to sue good law abiding companies out of existence. It threatens any company or website that depends on user-generated content, even companies like Riot. Instead of coming up with great ways to keep making games like LoL even better, companies will have to spend their money hiring lawyers. That's why companies like Riot, who want to protect the games they create, are opposed to SOPA.

I?ve been working on alternative legislation that would protect the games companies create while also fostering innovation. But we also need you to call your members of Congress and let them know of your opposition to SOPA. This bill has a very real chance of passing, and it is up to all of who want to protect the Internet to take action. More information is available at http://keepthewebopen.com/. Please make your voices heard in this debate! I will be happy to respond to your posts below, and will check back every few hours today and respond to as many as I can.

Tweet
Tags: SOPA anti-piracy bill PIPA Jared Polis gamers
<CES: What is the future of Motoblur when Google takes over Motorola? >Artists are doing better than ever according to the US Labor Department
Previous Next

I think the bigger problem is reps posting on twitter during hearings.

Originally posted by HxCMANIAC: I think the bigger problem is reps posting on twitter during hearings.

I think an even bigger problems is that they have such little knowledge that they don't even realize that SOPA could shut twitter down
XXYYQQOO!!! Yeah WELCOME TO JAMROCK

As I have been saying control the money flow not the flow of information.

Copyright infringement is nothing more than civil disobedience to a bad set of laws. Lets renegotiate them.
412.1.2012 17:59
LordRuss
Send private message to this user
Senior Member

Piss, Bitch & Moan as I may the real issue is that all our elected offices seem to care about is their wallets/purses & are quite apt at voting into laws that which they deem compatible with sounding like putting the highest wad of money back into into said holding compartment with least amount of work or jail time in consideration.

This includes swaying votes with those most involved with structured lives with the boogeyman & beliefs structures around the "What IF" game of life.

As it was explained to me, "IF" will never happen, but so strong is the power of 'if' & that of 'stupid'; 'if' will drive people to do stupid shit till their dying breath.

What 'if' pirates download all the movies, games, music, tv shows... It'll never happen, but Hollywood, Nashville, MPAA, RIAA etc., they all have the right people BSed into thinking it will & now we all see what it's starting to become.

Still don't think so? Look back 80 years ago at one motivated German vegetarian did when he got his depressed countrymen united against a defenseless group of people of one religious faith. He never used 'if' in his rants. He used the word "WHEN".

Man things just got real...a Politician that is asking the gaming community(which Gamers all reader are) to be against SOPA and PIPA.

Someone told me once that theres a right and wrong, and that punishment would come to those
who dare to cross the line.
But it must not be true for jerk-offs like you.
Maybe it takes longer to catch a total asshole.
713.1.2012 15:19
LordRuss
Send private message to this user
Senior Member

I hope someone catches this comment before the thread goes dead!!!

Just found this LINK about the author of SOPA actually being in violation of the very law he has written.

Talk about the pot calling the kettle black.

Granted, I have no idea as the volitity of the site in which this is quoted from or if indeed AD has already reported this. I'm just sharing the wealth. But indeed, my how the mighty are hypocritical & they may fall.

Originally posted by ZippyDSM: As I have been saying control the money flow not the flow of information.

The problem is exactly that. Those that control the flow of money control congress with it. Congress isn't going to go against the media mafia, GE, or banksters who provide the bribes, place the lobbyists, write the bills, or provide the campaign funds.
Only the fear of losing their fortunes and power will spur them into any action the people want or anything that's good for the country.
Vote them out. ALL of them, no matter what, no matter matter party. Run yourselves, don't make yourself beholden to these people that control the money flow by accepting anything form them. It's a slim chance, but that's the only hope.
Comments have been disabled for this article.