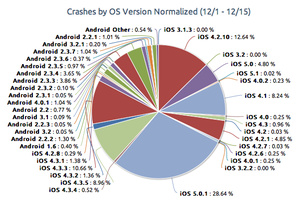 According to a new report from firm Crittercism, iOS apps crash more often than Android apps do.
The smartphone app monitoring company collected data for 2 months from all versions of iOS and Android and came to the conclusion after breaking down all the data.

Crittercism says they found 23 different versions of iOS and 33 versions of Android, pretty much the entire range of versions ever made available for each smartphone OS. 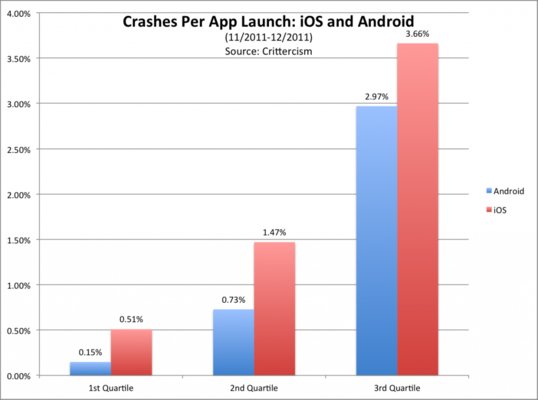 Running Motorola Droid (Original) Rooted with a custom ROM. Apps load forever because the device is slow as hell but I have yet to see something crash.

It's all in the software, and whether or not developers can take advantage of the ecosystem of iOS and Android, so they can have stable apps, but rooting/jailbreaking your said iPhone and Android never hurts as long as you know what you're doing. I have heard quite a few people say that rooting/jailbreaking your phone can make a difference between day and night, it all depends on which ROM you use as well.

Chance prepares the favored mind. Look up once in a while and you might learn something. - BLUEBOY
35.2.2012 11:36
molsen
Send private message to this user
Member

I am not so surprised. Android is incremental in development os builds. Apple tries, but I can see them have issues from 1st iphone to current. I did have an app freeze on my 4s, but an update cured that. It was Iheart radio.

I've always had issues with the Apple vs Windows days so why wouldn't this article be any different?

Given that DRM & other proprietary 'anti-haking' anything these days being the culprit to pretty much any system instability/crashes are as much a sure thing as a $1500 hooker. What shocks me is that a company that touts a business model on refusal to change or compromise on outsiders input (especially mechanical, much less software repairs) would continue to have programming issues as they do.

Honestly, I should stop being shocked as it is common behavior I've seen exhibited since competition has been introduced against anything Apple does. Personally everybodie's numbers jumped. So they all need to get their act together.

Just more & more cord wood on the fire of that old 80s dinosaur business model of "screw the consumer, they bought it, they can deal with it" mentality.

But before someone jumps to the "Apple Aid Concert", I don't think the 'numbers' in the study are reflective of a saturation market of iPhones either. However, I will stand in my cesspool of an argument that statistics can be made to say anything.

I am assuming the apps monitoring company were actually in contact with the users of iPhone to come up with their statistics. It would have helped if they also gave a breakup of the original / jailbroken device users.