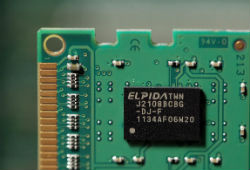 The Japanese chipmaker Elpida Memory, whose CEO noted the company's "uncertain future" earlier this month, has filed for bankruptcy protection.
Elpida's move is the largest corporate failure for a Japanese manufacturer since World War II.

Liabilities, as of March 2011, were $5.5 billion and the company's desperate attempts to refinance or get a bailout from the Japanese government failed.

Elpida was Japan's last DRAM maker and the company was ultimately done in by a Yen at its strongest levels since the end of World War II. Furthermore, South Korean rivals like Samsung managed to take large market share in a short period of time thanks to cost efficiency.

Samsung had 45 percent share as of September 2011, followed by Hynix at 21.5 percent and then Elpida and Micron at 12.1 percent each.

The company hopes to re-emerge under the supervision of the Tokyo District Court, says the WSJ.
Tweet
Tags: Japan elpida dram
<Google's pay TV plans take shape with IPTV filings in Kansas City >Report: Apple iPad 3 will not have quad-core processor
Previous Next

I wasn't aware that Japan was making any memory at all. Design perhaps, but 'making'? Most if not all of that is being done out of Korea, or have my meds & ability to heavily camouflage from the earth's surface once again shielded me from another manufacturing global move I was made unaware of?

I mean their stuff goes into cheaper Kingston DDR3 stuff & some phones, but nothing that really stands out. Talk about trying to break into a market that had already been beaten into submission. The Koreans simply won't allow the Japanese into a market their dominating at the moment no matter what the cost. This is a 'history' thing here. Economics has very little else to do with it.