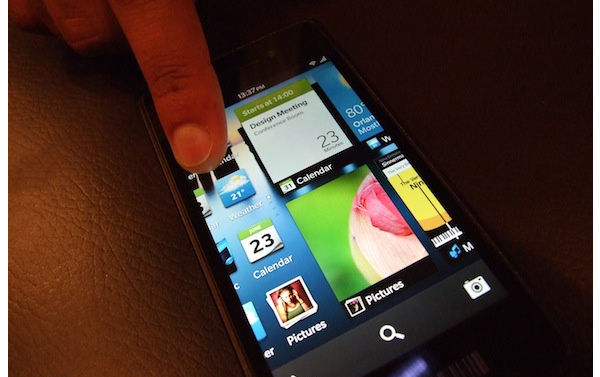 RIM's upcoming BlackBerry 10 mobile operating system, which is the company's last chance to get back to relevancy in the smartphone world, is apparently a hit with Canadian carriers.
The company's execs have been showing off the progress of the OS to their carrier partners for some time now.

Says Andrew McLeod, managing director of RIM's Canadian operations: "The response that we got back from the executive team at some of the Canadian carriers was tremendous. They were visibly positive and visibly enthusiastic."

The demos were held in Canada and the U.S. and led by new CEO Thorsten Heins.

"We're in the process of finalizing the software," McLeod added. "It was at a point where we had a confidence level that we could really demonstrate the validity of the products and software. Obviously, you don't want to show something that is not going to wow folks. People were excited with what they saw."

BB10 is expected to launch in the first quarter of 2013 and will have to compete with iOS, Windows Phone 8 and Android.
Tweet
Tags: RIM iOS Carriers BlackBerry 10 operating systems
<Analyst: Apple HDTV not coming anytime soon >IDC: PC growth to slow significantly this year
Previous Next

Too bad its not the carriers you need to please.

Originally posted by Azuran: Too bad its not the carriers you need to please.

That's false. While, yes, you DO need to please the end-user, you can't get your product into that user's hands, if the telco corporate gatekeepers won't let you.
327.8.2012 21:49
1nsan3
Send private message to this user
Member

BlackBerry is ok. i hate the track ball. and the OS. but the phone with the keyboard is good. if that was an android i would buy it hands down. i hate the virtual keyboards. but love linux.

Well, what do you EXPECT Andrew McLeod, managing director of RIM's Canadian operations to say?!
I'm sure Hitler gave some very positive propaganda blurbs about Nazi-ism as well.

...RIM has nothing to do with Nazis. Relax.

If only they would allow phone OS upgrade which are NOT tied to specific service provider!