Recent headlines | Russia introduces new 100 rouble bill - but you can't get it from ATMs or to pay with it 1
AfterDawn > News > Microsoft preparing to acquire Rdio? 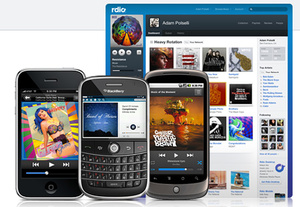 The latest rumor, from sources out of Europe, claim Microsoft is preparing to purchase digital music streaming company Rdio.
So far Microsoft and Rdio declined comment, but the deal would certainly make sense.

Rdio, the ad-free music service is available in the US, Canada, UK, France, Germany, Brazil, Australia, Spain, Portugal, Denmark, Finland, Sweden, Norway and New Zealand, practically every major market Microsoft would be aiming for with its new service.

The popular service is available for Mac, Windows, iOS, Android and Windows Phone and could provide an excellent framework (as well as added customer base) for Microsoft.

Rdio's catalog now has 18 million songs and attracts new musicians by giving them a revenue split for new subscribers they attract. While Rdio is popular now, it is getting blown out of the water by rival Spotify, which has a partnership with Facebook. A purchase by Microsoft would certainly help the company compete.
Tweet
Tags: streaming Microsoft acquisitions Rdio
<Facebook reaches 1 billion users >New AMD Trinity overclocked to 7.3GHz
Previous Next

Originally posted by morphx: I love my spotify app on my iphone and ipad 2 ^_^

Yea, and I would love it even more if they wouldn't spoon feed me their required Facebook registration, as SOME people do not have a Facebook and never will, and I'm one of those people. Rdio would be wise NOT to follow these footsteps if they want to remain successful in the business realm. Just because some social site is popular, doesn't mean it's the right thing to do. Just look at MySpace and you'll see how quickly they fell when they were once in their prime...