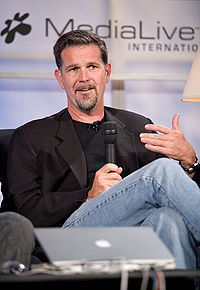 Reads the post, "House of Cards fav quote: 'look at the bigger picture.' Over the last three months, you all watched over 4 billion hours on Netflix."

The company ran into trouble in July after Hastings revealed similar information on Facebook. The SEC began an investigation into whether it was appropriate for execs to reveal information that might move the company's stock via social media. It recently ruled that companies could do so but they must tell investors beforehand which sites they will be using. Netflix announced on Wednesday that it would disclose information via its blogs, Facebook and Twitter.
Tweet
Tags: Facebook Netflix Reed Hastings
<Iranian scientist has invented a time travel machine >Rockstar makes 'Grand Theft Auto' radio stations available in entirety on Spotify, iTunes
Previous Next

Thinking about cancelling it here in Canada. For cartoons and some TV Shows it's good, but there's no selection in movies compared to the US Netflix.