According to new comScore data, Apple still tops smartphone market share in the U.S. over other brands, even though Android remains the top operating system.
Apple ended May with 39.2 percent share, up 0.3 percentage points from the quarter before. Rival Samsung saw strong growth from 21.3 percent to 23 percent by the end of May, likely thanks to the launch of the Galaxy S4.

Other smartphone makers continue to fall into irrelevance behind the duopoly, with HTC, Motorola and LG all falling. HTC now has 8.7 percent, Motorola has 7.8 percent and LG has 6.7 percent rounding out the top 5.

Overall, 141 million Americans owns smartphones, good for 59 percent mobile market penetration. That number is expected to hit close to 100 percent in the next 5 years as feature phones are increasingly phased out.

Android was the top OS, with 52.4 percent share of all smartphones, followed closely by Apple at 39.2 percent. BlackBerry cliff dived again, this time to 4.8 percent, followed by Windows Phone at 3 percent. 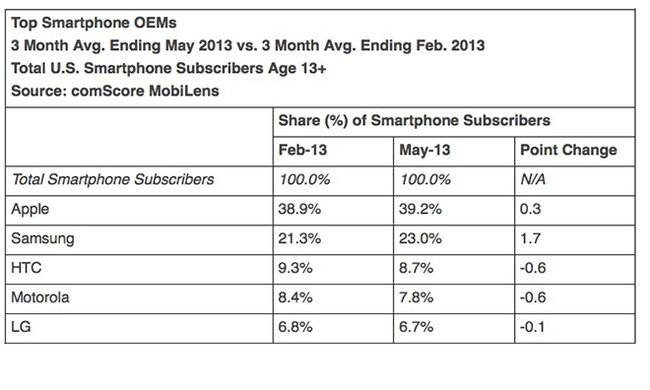 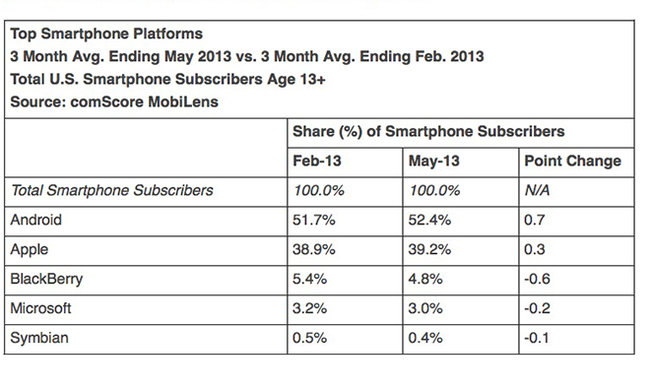 There are some webOS users out there still I think? Anyone? No one? Just me? Oh ok...

That aside, I can only see the trend moving up since iphone hasnt changed much in basic functionality.

Ha! Poor Windows Phone! They may have stopped the drastic plummet from the CE/Windows Mobile era a few years ago, but still decreasing, though at a much slower rate.