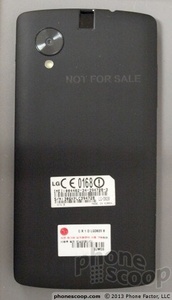 Although it has still not been confirmed, it seems to be a lock now that LG is building the Nexus 5, and we have already seen it in action thanks to an inadvertent Google slip.
The FCC has now posted pictures of a device that is made by LG and looks almost identical to the image we saw in Google's Android 4.4 statue video.

FCC's filings show off at least a prototype of the Nexus 5, which will certainly have an improved camera from its predecessor.

There is little else known about the phone but it is rumored to have a 5-inch screen, a quad-core Snapdragon 800, 2GB RAM and LTE support.
Tweet
Tags: fcc Google Nexus 5
<Michael Dell to take company he founded private >Walmart drops prices on iPhone 5C, 5S
Previous Next

come out already i need a phone ASAP!