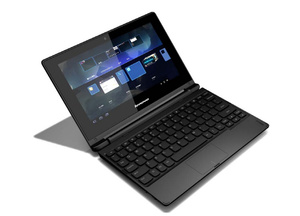 Just hours after user manuals leaked online, Lenovo has confirmed it will soon be launching an Android-based notebook.
Dubbed the IdeaPad A10, the notebook will have a small 10.1-inch touchscreen display and run on the latest Android operating system.

The manuals say the device can be opened up to 300 degrees, and the keyboard will include the signature Android buttons for "home screen" and "back."

Given the leaked specs, the device is expected to be cheap. It runs on an ARM-based Rockchip quad-core processor clocked at 1.6GHz, has 2GB RAM, 16GB or 32GB internal flash storage and a 0.3MP front-side camera. For connectivity, the device will include an HDMI port, USB ports and a microSD slot.

Other manufacturers have made similar devices in the recent past, including HP and Asus.
Tweet
Tags: Android Lenovo IdeaPad A10
<Toshiba: All of our enterprise sales are for Windows 7 devices, not Win8 >Rockstar Games to give GTA V players in-game cash as apology for online issues
Previous Next
Comments have been disabled for this article.