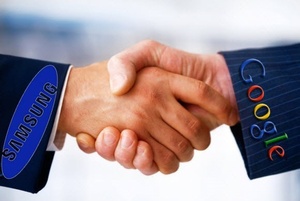 Samsung and Google have reached a broad ranging deal that will entitle both companies to cross-license each other's patents.
The deal will cover both existing patents and those that may be filed in the next ten years. The deal also extends beyond just Android and mobile and will cover other product categories.

While Samsung and Google have been "friends" for the most part in the global patent wars, the deal will likely help Samsung in its ongoing battles against Apple.

"This agreement with Google is highly significant for the technology industry," said Dr. Seungho Ahn, the Head of Samsung's Intellectual Property Center. "Samsung and Google are showing the rest of the industry that there is more to gain from cooperating than engaging in unnecessary patent disputes."

Google deputy general counsel Allen Lo also added: "By working together on agreements like this, companies can reduce the potential for litigation and focus instead on innovation."
Tweet
Tags: Samsung Google Patents
<Google buys AI company DeepMind >LG: G2 and Nexus 5 smartphones boosted our sales immensely
Previous Next
Comments have been disabled for this article.