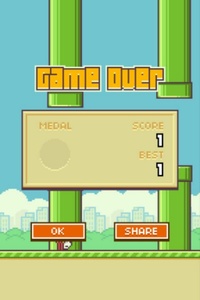 As promised, Dong Nguyen, the developer of Flappy Bird, has now removed the game from the iOS App Store and the Google Play Store.
The developer looks to be shying away from the spotlight, as the game was bringing in about $50,000 in ad revenue per day after being released just last month.

If you already have it installed, you can continue to play it but searching will lead you to a page that includes reviews but no ability to download.

The frustratingly addicting game was the top free game for both Android and iOS. The developer's tweet announcing the news has quickly become one of the most retweeted Tweets of the year, with 130,000 rewteets in 24 hours.

You can still get the APK installer on TPB.

In other rediculous news, in the link above me, is an Apple 5S with said game that's currently going for $100,000+. Hoax bids anyone?

This guy pulling a Dave Chappel?

OH NO...I'm getting too much attention and making too much money for practically no work. Oh, poor me!

Originally posted by KillerBug: OH NO...I'm getting too much attention and making too much money for practically no work. Oh, poor me!

Make alot of $$ and shoot off before nintendo lawyers come in
Who Dare Wins
910.2.2014 16:13
Ripper
Send private message to this user
AfterDawn Addict

Flappy Bird 2.0 coming to your screens in approximately 4 weeks time*


*in-game ads to cost three times as much as before

flappy bird dev blows brains out because can't handle the cash flowing in from everywhere!!

Mr FlappyBird Dev, PLEASE do not develop any more games. since you are a huge pussy and do not belong in the DEV world.

wow what would happen if he created a Hit xbox or playstation game!!

someone will create a flappy bird copy so dont worry!!!

The game is still being played, the ads are still there.... So, I bet the cash is still coming in.

Originally posted by 1nsan3: someone will create a flappy bird copy so dont worry!!!

No worries...if I wanted to play it I would get the APK...and I don't want to play it.

Originally posted by dEwMe: This guy pulling a Dave Chappel?

Maybe you're right. But this guy could just relax unless someone was threatening him. I do think that Chappel was under pressure to keep producing material. I saw him being interviewed on Oprah and he still didn't seem to get that he had a breakdown... part of the macho culture he feels part of I suppose.

The both of you are a litte off when it comes to Dave Chappel.

For one thing, it's "Chappelle".

Originally posted by Bozobub: For one thing, it's "Chappelle".