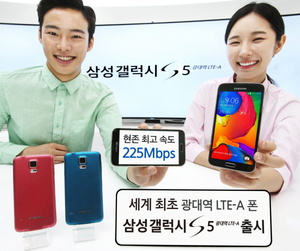 Samsung has unwrapped a gift for the Korean market, the oft-rumored Galaxy S5 LTE-A (Galaxy Prime) with much improved specs from the recently released international S5 model.
The new model offers support for the ridiculously fast data speeds of LTE-Advanced (as high as 225Mbps) but also packs a redone interior that easily blasts away the international S5 model.

Under the hood is a 2.5GHz Qualcomm Snapdragon 805 processor, 3GB RAM, a 16MP camera, 2,800mAh battery. The device is waterproof and dustrproof (IP67) and most importantly, has a QHD Super AMOLED display (2560×1440), a nice improvement from the 1080p display and Snapdragon 801 processor of the standard S5.

It is very unlikely that the Android KitKat device will ever make it to the U.S. (or anywhere outside of Korea) but we can dream.

if you even thought about using those speeds on the U.S. Cell network, the network would melt and then implode.

Originally posted by DXR88: if you even thought about using those speeds on the U.S. Cell network, the network would melt and then implode.

Why is it only available in South Korea?


What a contrast to the benighted North of the country.

Originally posted by Jemborg: Why is it only available in South Korea?


What a contrast to the benighted North of the country.

Quote: ...unclear on whether the Galaxy S5 LTE-A standard available in the UK but is currently going under major testing within the US, for the current moment...

http://asiatechhub.com/samsung-releases...te-south-korea/
Live Free or Die.
The rule above all the rules is: Survive !
Capitalism: Funnel most of the $$$ to the already rich.
520.6.2014 00:20
Jemborg
Send private message to this user
Senior Member

Do you know if their LTE-A standard is wholly a private initiative or is it gov (or mixed)?

Not available out of Korea??? WTF is that people?? THe US is their main source of revenue and we get straight jacked??

Cool device though........almost makes it worth it to live butted up to N. Korea

Do you know if their LTE-A standard is wholly a private initiative or is it gov (or mixed)?

As far I know:
A= Advanced. For smart antenna technologies, to enhancing quality of the serving cell signal.
But they are diff. between LTE & LTE-A on Radio/spectrum/HetNet/RATs Interference, etc.
LTE-A is another phase of LTE of many proposals and also LTE-A as being described as a 3.9G (beyond 3G but pre-4G) = Best candidate for 4G by the ITU (International Telecommunication Union)

I see all the comments, you guys do realize Samsung is based out of South Korea, so why not give your home country some special lovin'! Also their country has some of the fastest internet in the world, the USA is falling way behind in internet speeds and this phone would be absolutely gimped in the USA. I still wish I could have one, but I am pretty optimistic a variant will show up here (Arizona T-Mobile user here)!