Recent headlines | Samsung Android 12 update timeline - when your phone will get it
AfterDawn > News > Report: iPhone 6 Lightning cable to be reversible USB? 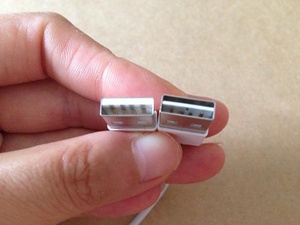 According to new reports, Apple could be preparing to unveil a new Lightning cable for the iPhone 6 that can be plugged into a USB port with either way up, avoiding user confusion that has existed since the beginning of time.
Apple filed a patent in 2013 that described "reversible or dual orientation USB plug connectors" that can plug into any standard PC and "reduce the potential USB connector damage and user frustration."

Such a design would also be future-proof as long as the computer (or other device) has a full-sized USB port.

SonnyDickson also leaked a photo of the alleged cable:

A lovely an idea of reversible cables.

The engineers at crapple are retarded. They always have the worst connectors ever thought of, except for that magnetic power cable they bought up from them milpitas boys, at least they paid for that one. I think a bigger offense is their engineers' idea of thermodynamics and what they consider an acceptable level of heat. Dumbshits, total ignorant dumbshits. I have had to explain to them on multiple occasions why some of their products won't work. They make shiny sparkling shit, but in the end, it's still shit.....but damn that shit looks good. I guess they made the right choice when they decided to put their money into their industrial designer rather than hiring an EE that knew anything at all about consumer electronics.
Okay, end rant, what were we talking about again? Oh yeah, lol, reversible USB. Seems like a good idea, atta boy apple, finally invent something for yourself. Oh wait, no you didn't, all you did was make a variation on the already existing spec for reversible USB using the USB C connector, except you combine it with that shitty lightning connector so you can make major scrilla on a proprietary connector. Damn those genius assholes, I'm offended as a consumer and jealous as a patent inventor cuz it does seem like something the sheeple will rave about: Having both ends of the cable being reversible so you don't have to think, sheeple hate thinking and would much prefer that crapple tells them what to think.

Originally posted by seths: The engineers at crapple are retarded.


I'll take that part back, sorry, from what I hear, Apple is absolutely not an equal opportunity employer. Word on the street is that you have to be a genius, which is odd cuz genius' don't use Apple, or PC for that matter, they use BSD.......Oh damnnnnn, so does Apple.

As sths notes, this idea is NOT new in the slightest. I wonder if Apple will try to sue the USB devs for "stealing" Apple's idea, 2 or three years BEFORE Apple thought of it =p .

Originally posted by Bozobub: I wonder if Apple will try to sue the USB devs for "stealing" Apple's idea, 2 or three years BEFORE Apple thought of it =p .

Bwahaha, and to quote Steve Robs himself "we have always been shameless about stealing great ideas"