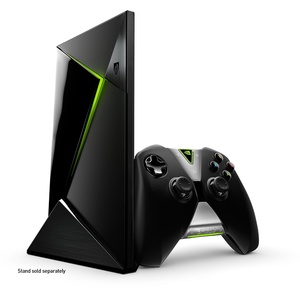 Earlier this week, NVIDIA launched the SHIELD Android TV set-top box with a base price of $199 and the early reviews are highly favorable.
The SHIELD has 16GB of internal storage, 4K support, is powered by a NVIDIA 64-bit Tegra X1 processor, 3GB RAM and 256-core NVIDIA graphics. In addition, the set-top supports HDMI 2.0, runs on the Android TV platform including Google Cast support, has a microSD slot, 802.11ac dual-band Wi-Fi, Gigabit Ethernet and two USB 3.0 ports. The SHIELD bundle also comes with a SHIELD controller and a free HDMI cable, a good deal given the controller's $49.99 price tag.

Of course, the SHIELD is not the first set-top in a growingly crowded market. How does the SHIELD compare to its main rivals the Apple TV, Amazon Fire TV and Roku 3?

On paper, the SHIELD destoys the competition but the price is at least double its rivals. Is it worth the premium price?

So this is basically a 200 dollar set top game system that also happens to play nice with your android or apple phone? I can't see this gaining any traction. I have a Roku 3 and have not had any problems streaming netflix, amazon instant video, or crunchyroll. I only want it to watch media, not to play games. I have other stuff to do that. There aren't many people who don't.

No, it's a $200 game system that also is a far more capable multimedia set-top box than the competition. Also, as an Android-based gaming system, its specs are also far beyond the competition.

And most people *do not* have any other set-top box, by the most recent numbers, and a large number don't have a game console; in other words millions of people. Remember, YOU do not necessarily define what is "standard" or "normal" =) . A lot of people will find the combination of ultra-high-end Android gaming + multimedia set-top box to be quite attractive; I do, although I can't afford one at the moment.

well i don't personally know anyone who doesn't some sort of game console and/or dedicated streaming media player already. if you are speaking to someone who wants to be introduced to either of those things (usually one or the other) 200 is too high for a streaming player (for the uninitiated) and 200 is questionable for a gamer unless they play a bunch of casual games. i'm not saying there aren't some good games for android but compared to xbox or playstation...i would spend that 100 more but that's just my personal opinion. i can see the appeal for an all-in-one media experience but only for those who don't already have a game system they like or a streaming player. if you have one or the other you might as well invest in a dedicated system.

YOU not knowing someone who doesn't have either simply is not equivalent to "everyone has one"; not even close, by the easily-googled numbers. Not even close. And there always are new consumers for any market. As to a "dedicated system", I you should tell Sony and M$ that, considering they've positioned their game systems as home entertainment hubs, not just game platforms; I'll refer you to their rather incessant marketing - lol. This system has reasonable potential for market penetration where previous systems couldn't gain much ground.

Why a high-end Android system? Well, if you like emulators, that's one damn good reason. Another good reason is that a more-open system will likely allow alternate media players, just as one example, unlike most lower-spec alternatives (barring hacks).

I certainly agree that this system won't be for everyone! That said, I'll have you know that people were similarly dismissive of the Atari 2600, the first widely-accepted home video game system =) . If Android hardware developers simply sit on their duffs and don't try to push the envelope, it simply won't improve, and THAT is a good reason to laud their effort, even if no others came to mind.

Your comparison to Atari isn't really the same. Atari was a trail-blazer. If they would have failed, it would have been because of lack of interest and not because they had competition who pushed them out. This isn't the same thing with what NVIDIA is doing.

I'm not being dismissive. I'm just saying from a marketing standpoint, I don't see NVIDIA standing out that much with what they are offering. Many different manufacturers are jockeying for position in people's living room. Sony and M$ are different in that they already have popular platforms taking up living room space and made minor alterations to it. This was purely a marketing push to grab people on the fence who would like a gaming system (or already had one) but also needed/wanted to consolidate their media devices. It made sense because they already had streaming capabilities. How much harder would it be to allow apps to stream other content?

The point I'm trying to make is that when you think about NVIDIA you think graphics cards. They aren't known for making media centers and they aren't known for gaming systems. To compare let's say a company like Nike, you think shoes. Although they do make performance apparel, that's not what they made a name with and are best known for. Not like say Under Armour or Champion, for example. With them, they are known for sports apparel. I know Under Armour tried to get into running shoes and it was horrible. Under Armour didn't have the background in shoes, they were the trail-blazers of performance apparel. NVIDIA may be successful with this but I doubt it would be anywhere near the scale of Sony and M$ for gaming or the other competitors for media centers/streaming content. They are trying to enter into an existing (and competitive) market. It does not seem like they have a clear plan. That's why Under Armour failed with their shoe line (other than cleats which is a very niche market).

You say there are developers for Android who want to be on the cutting edge and I'm sure that is true. Making games and apps for Android is not like the closed system Sony and M$ have. For them you have to build within the limitations of a set system. Android can run on many devices with different specs so you could take your pick. This is why, from purely marketing standpoint, a profitable developer knows to build for the lowest common denominator. You want something that will run on most devices. It would be crazy to cut yourself off from potential revenue by targeting only the cutting edge equipment.

Sorry this post is so long but my opinion is based on my experience in marketing. Early adopters will love this, I am sure. Those type of people are a niche who have extra money to burn on stuff just because it is shiny. Developers would make money for this niche market without question but the prices for games pushing the envelope on it would probably rival what you would expect for an xbox or playstation game. Those making casual games for the lowest common denominator will also win because it would be compatible with an android based system anyway.

I think more competition is always a good thing. Those who can differentiate themselves from the competition will prosper and those who offer little above the rest will eventually fade away. That's just how things are. I don't think it's a bad effort, I'm just saying it doesn't really make sense from a marketing perspective because the battle for your attention in the living room is going to continue to heat up. You see how the ouya crapped out. There was so much hype for it but there was just too much equipment already out there that can do the same thing.