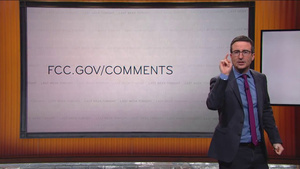 Host of HBO show had called on the public to flood the FCC with comments opposed to repealing net neutrality regulations.
Last Week Tonight host John Oliver made the plea in a segment on his weekly show on Sunday, mirroring a similar plea he had made a few years previously that led to the FCC's servers being overwhelmed with traffic.

This time, however, it doesn't appear to be concerned citizens that have caused an issue for the FCC's services. Instead, the regulator claims it was deliberately attacked on May 8.

"These actors were not attempting to file comments themselves; rather they made it difficult for legitimate commenters to access and file with the FCC," chief information officer Dr David Bray said.

"While the comment system remained up and running the entire time, these distributed denial of service (DDoS) events tied up the servers and prevented them from responding to people attempting to submit comments."

FCC chairman Ajit Pai said earlier this year that Net Neutrality rules would be reviewed by the regulator, adding that the rules had impacted investment, innovation and job creation.
Tweet
Tags: fcc John Oliver
<Windows 10 running on half a billion devices >Offline viewing now easier in Chrome on Android
Previous Next
Comments have been disabled for this article.