Recent headlines | End of an era: iPod discontinued - the device that revolutionized music industry
AfterDawn > News > EU copyright directive could strip Google search, here's what it would look like

EU copyright directive could strip Google search, here's what it would look like

Late last year European Parliament voted for a new copyright directive which would have massive implications to both EU citizens as well as technology companies when it comes to sharing information online.
One company that has been very vocal about the shortcomings of the new laws, especially Article 11 and Article 13 within the directive, is Google. The search giant would have to start paying license fees to share pictures, summaries, or even headlines of linked news stories.

To further make the point, Google has provided Search Engine Land screenshots to illustrate how ridiculous the proposed laws are.

The picture is perhaps the most extreme example since companies could, for example, agree to provide some information in order to improve their ranking in search. What that world would look like, no one knows as of yet.

EU directive is currently in the final stages of drafting after which it needs to be ratified by the member states. Alongside Google and other tech giants digital rights groups such as the EFF have expressed their concerns over Article 11 and Article 13. 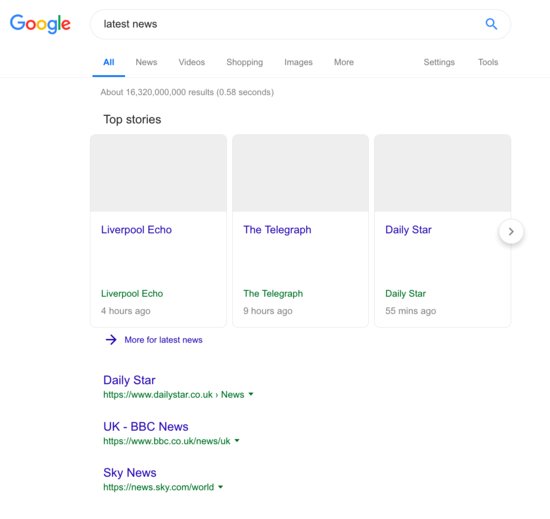 this is a law intended to sensor the inanimation the Internet can provide.news stories should not be illigl to post on the internet without payment , the fees would be outragiuse. i understand that news companies are not making as much money as they did before the internet but potintally money google would have to pay becuse of that is rediculas too.