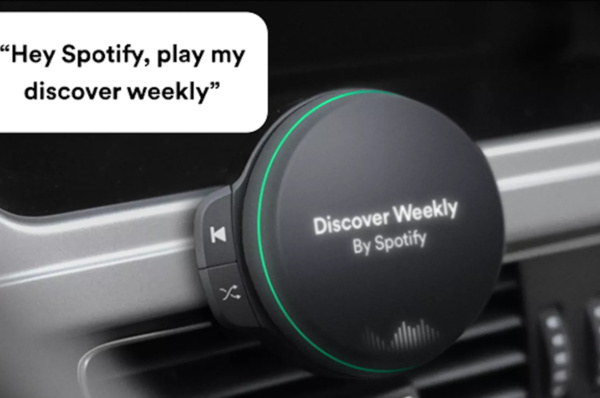 The world's leading music streaming service has managed to keep itself on a narrow path not expanding the scope of the operation beyond simple streaming service, and perhaps that is what's responsible for the company's continuing success in entertainment.
However, profits aren't exactly piling in, and there are signs that Spotify needs some innovation to reinvent itself.

One thing Spotify hasn't expanded to is hardware, but that is about to change, according to reports by the Financial Times.

FT reports that Spotify is preparing a hardware launch, the first for the company, later this year. The device is said to be a music player for your car.

The player obviously connects to the internet and works as a standalone Spotify player, and is controllable by voice. This allows users who don't have newer cars with fancy infotainment systems to enjoy streaming music easily during their commutes.

Rumors have it that Spotify's music player connect to the car speaker system by Bluetooth and will cost around $100. It will work without a smartphone, although it is yet uncertain if it has data connection built in.

Details are still sparse, and there's no precise launch date yet.
Tweet
Tags: Music Player Cars Apple CarPlay Spotify
<How to take screenshots in Windows 10 >Microsoft wants Cortana to be Alexa's friend, not enemy
Previous Next

Not everyone has a bluetooth enabled car radio or even a car radio with aux or USB connections. The only other option would be to connect to your car radio via an unused FM station. So I am not sure how successful this hardware venture will be. Especially when you can access Spotify via your smart phone and connect your smartphone to your car radio via bluetooth. Since Spotify is a internet music streaming service it looks to me like it would need access to the internet so it will have to connect via satellite or your smartphone anyway.

I'd assume it would sync itself when your car is near your wifi. Could be good for people with limited storage space on their phone. Seems pretty niche though