Recent headlines | Russia introduces new 100 rouble bill - but you can't get it from ATMs or to pay with it 1
AfterDawn > News > News in August, 1999: Matrix vs Titanic, which movie will break the record? Also: MP3 arrive to your home stereo system, ...

News in August, 1999: Matrix vs Titanic, which movie will break the record? Also: MP3 arrive to your home stereo system, ...

In our article series, we're digging into AfterDawn's news archive and looking what happened exactly 20 years ago. This article series also celebrates AfterDawn's 20th anniversary.
So, we're digging into our news archive and trying to figure out what was hot and what was not, back in August, 1999 when our site was only 2 months old. I'd like to remind you, our readers, that back then, AfterDawn was strictly focused on digital audio and video technologies and reporting events in those genres. More generic "all about tech" arrived to our site much later.

DVD releases were back then what the Netflix releases are now: Matrix as an example


Back in 1999, DVD players were The Tech that many households were planning to get for the "entire family's Christmas present" - i.e. the most sought-after tech that had hit the mainstream. Thus, new DVD movie releases were also big news back then, just like, say Netflix's next month's releases are now.

In the autumn of 1999, the most anticipated movie release among the tech enthusiasts was definitely The Matrix, which was about to be released on DVD format in September. Warner Home Videos, who owned the DVD rights, was hoping that Matrix would become the first movie ever to sell over one million DVDs. But, at around the same time, in in the end of August, another blockbuster made its way to DVD format, too: Titanic. Which one won the race? Well, ;Matrix did.

Back in August, 1999, we wrote about other upcoming DVD releases, too.

If there's a format, there will be collectors...


As DVDs were replacing VHS tapes in living rooms all across the world, people also started to build massive collections of DVDs. And everyone who has ever collected.. anything.. knows the struggle on how to know what you already have in your collection and what you're missing.

Thus, a new breed of Windows software was born: Personal DVD movie databases. We wrote a news article about one of such software: DVD Dewey. Now, doing a quick search for that specific software.. nada. It has vanished sometime during these past 20 years.

But, this specific software genre is still very much alive, with several major software projects still going strong. One such example is quite popular EMDB which is free and you can grab your copy from our software section.

MP3 comes to your living room


Back in the 1990s, the good old TV wasn't the only precious thing in most living rooms. Nope. Everybody who claimed to know a thing about music, kinda "had to" have a proper home stereo equipment, with its own cabinet and all those separate units interconnected to build the perfect music hub for the 1990s living room. 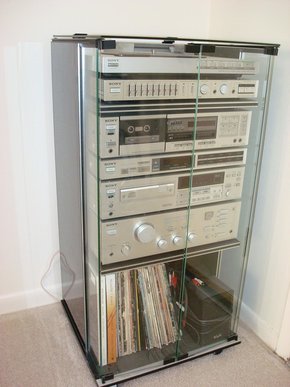 example of a good olde home stereo system from 1990s


And to cater to that need, a small company called NetDriver released the world's first MP3 player for home stereo systems. Yes, it was the standard-sized equipment, meant to be connected to rest of your home stereo equipment. The player itself was basically a CD player that could also play MP3 data from the CDs - revolutionary idea back then.

Now, as home stereo cabinets can be found only from flea markets and from hard core hi-fi enthusiasts' living rooms, the market has pretty much dried up. But the NetDriver's player started a trend, however. Nowadays, probably all the home stereo CD players are capable to play MP3s (and wide variety of other formats, too). Sure, most of us probably prefer not to burn the MP3s to CD-R discs anymore, but use Bluetooth, USB or - most likely - streaming services, such as Spotify, as the audio source.

Various other topics happened back then, too


As our site was still pretty much in its infancy, our hands were mostly tied to various development projects. We had a massive to-do list of things we'd like to add to AfterDawn's site. Some of those ideas later came to fruition, some were abandoned (yes, one of those was an idea of having a massive DVD catalog section on our site where our users could keep track of what DVDs they own).

In August, 1999, our news coverage also included news on how a/v technology was developing, at the very chip level, too: Motorola had just gained the certificate for its first-ever DD5.1 encoder chip, allowing DVD recorders to record also surround sound.

So, that's a brief summary of some of the highlights in our news 20 years ago. If you want to get more of these flashbacks, here are the other "20 years ago" articles we've published so far:

News in July, 1999: WinAmp vs Sonique - the era of Windows customizations

News in June, 1999: AfterDawn launches, ancient software updates and more
Tweet
Tags: 20 years ago The Matrix AfterDawn Motorola DVD
<Disney has a special Disney+ offer that only lasts a few days >Apple releases iOS 13.1 beta before iOS 13 is out
Previous Next
Comments have been disabled for this article.