As you might imagine, the technology industry has been suffering, although not as much as some other industries, ever since the COVID-19 hit the streets of Wuhan and the rest of the world.
For Apple this has meant the first ever virtual WWDC, iPhone production issues and plummeting sales.

While not selling expected amounts of iPhones translates straight into a bottom line of the quarterly reports, there are other not-so-direct implications too.

This is evident when DSCC has analyzed Samsung's Display division's quarterly guidance. Due to lower iPhone sales, Apple has ordered less of their high-end OLED displays – Samsung no longer makes LCD panels found in iPhone SE, iPhone XR, and iPhone 11 – but due to the contract Apple had to pay a fee for not ordering enough display panels.

According to their information this amount is a whopping $950 million which could have turned Samsung Display's operating loss into profit.

This isn't exactly all about coronavirus since Apple had to pay Samsung Display a slightly lower $750 million fine same time last year.

The parent, Samsung Electronics, is going to post an estimated $7.2 billion in operating profit, a slight uptick from previous quarter and previous year, although revenue went down compared to both instances. 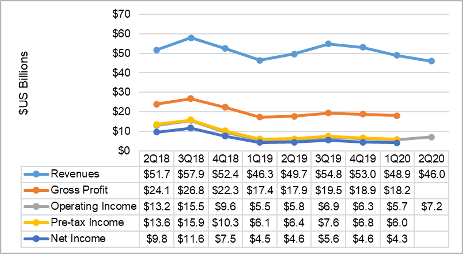