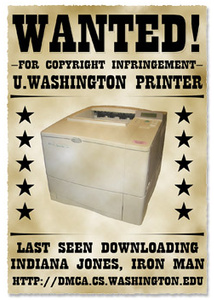 Since the RIAA first begain their campaign against illegal file sharing on P2P networks there has been intense debate over the methods used to figure out who's responsible for sharing copyrighted content. Now a a report from the University of Washington may prove to be a powerful tool for those accused of such illicit behavior in fighting back against their accusers. The report, written by Michael Piatek, Tadayoshi Kohno, and Arvind Krishnamurthy and based on experiments conducted in August, 2007 and May of this year, shows that some of the agencies tasked with putting a stop to illegal file sharing are making accusations that are simply false.
The report says "Copyright holders utilize inconclusive methods for identifying infringing BitTorrent users. We were able to generate hundreds of DMCA takedown notices for machines under our control at the University of Washington that were not downloading or sharing any content"

Takedown notices are the official mechanism used to report infringing content under the DMCA. They're routinely sent to ISPs, who then typically send a warning of some kind to the individual they determine was responsible based on information supplied by the copyright holder.

No doubt what will attract the most attention, and is certainly the most amusing aspect of the paper, is that 3 laser printers and a wireless access point were the targets of a combined 13 takedown notices. In each case, as well as 5 more where a desktop computer was alleged to have illegally shared files, it was due to intentional misdirection on the part of researchers who wrote "The potential for false positives and implication of arbitrary addresses undermines the credibility of monitoring and creates a significant inconvenience for misidentified users (if not financial and/or legal penalties)."

Despite the report's somewhat humourous point of view, in the end there's not much to laugh about. The researchers concluded "Our results show that potentially any Internet user is at risk for receiving DMCA takedown notices today. Whether a false positive sent to a user that has never even used BitTorrent or a truly infringing user that relies on incomplete IP blacklists, there is currently no way for anyone to wholly avoid the risk of complaints."

Finally Piatek, Kohno, and Krishnamurthy cautioned "Through extensive measurement of tens of thousands of BitTorrent swarms and analysis of hundreds of DMCA complaints, we have shown that a malicious user can implicate arbitrary network endpoints in copyright infringement, and additional false positives may arise due to buggy software or timing effects."

They urged enforcement agencies to adopt a "more thorough approach to detecting infringement in BitTorrent" to avoid the problems described in the paper, but note that it would be significantly more difficult than the way these operations are handled right now.

You can find more information about report at the University of Washington website.
Tweet
<VLC Media Player coming to jailbroken iPhones and iPod Touch >Xbox 360 does not violate Alcatel patents, rules jury
Previous Next

lol, this is pretty funny.

MPAA=n00bz! ha they can't do anything right:)

btw it seems MediaDefender is dieing.....i've noticed a slow down in there work in the past 6 months.......there just about done if you ask me....i think the MPAA used to contract them.....

Science can now show the MPAA is fallacious in their take down notice methodology. To use that methodology in a court of law and to use a scientifically peer reviewed paper such as the one presented here is asking for a an acquittal on the defendant's position.

MPAA is such a relentless group. Can they just give up already?

The media mafia needs to turn away from hounding the end user, focus on illicit profit.

No doubt they will take the printer and hub to court! Maybe we should start a fund for the hardware!? Lol I would love to see what a DMCA take down notice would look like for a damn laser printer.

WOW! all cases should be thrown out! If i was accused of killing someone and my DNA didn't match i would most likely not be found guilty! OJ had more than that & he wasn't found guilty...
what else can i say!

Too funny, I can see the scenario now.

Printer accused, tried and sentenced. Must pay $250,000 to MPAA. Printer starts printing out funny money to pay fine and is busted for counterfeiting. Then printer is tried and sentenced to the federal pen where unspeakable things happen to it in the shower.

I hope those morons read these forums and see what DA's they are!

This is too funny, I wonder how they got the laser printer to look as if it was exchanging data via bittorrent.

Quite a flawed technique really. They use the list of IP's in the BT client and are able to simply assume that these "peers" are actually exchanging data, rather than connecting directly to the peer as they do with the likes of kazaa and limewire.

this has got to be the funniest $hit i have ever read lately...lol, that is awesome!

Bah! A public defender could get the printers and AP out of this. I hope they counter-claim!

This morning I read that the printers were actually being forced into their life of crime by the WAP. I hope they throw the book at him ;-)

But according to the MPAA, the glove fits everyone.
"The flimsier the product,the higher the price"
Ferengi 82nd rule of aqusition

/me looks through blocklist and finds riaa/mpaa ip's.. then sets external proxy to spoof those ip's every 20 packets back to the tracker... lets see them bust themselves...

But according to the MPAA, the glove fits everyone.

But according to the MPAA, the glove fits everyone.


Not everybody - just the list of people the tracker says it fits. Come on, they'd have to go through hundreds of gloves to actually let everybody try it on.
216.6.2008 13:39
DXR88
Send private message to this user
Senior Member

Well Vurbal You got a Point there. that be a lot of Gloves huh.

TO COURT!!! lmao....the laser printer would probabaly need a lawyer...or wait, maybe the laser printer could speak by printer what he wants to say in fast and high quality manner!!!
LMAO...
This is like the funniest thing ive heard all day...
Yes my life is boring :(

Well, i've scolded my printer and instructed it to spend the rest of the evening in the corner.

Unfortunantly, watching the downloaded movie on that tiny, LCD display on the front of the printer just sucks.
I hope those printers get what they deserve!

15 years to Life... and I believe that the Lifecycle on one of those printers is about 500,000 prints... they could be in for a very long time indeed.

Originally posted by ThePastor: Unfortunantly, watching the downloaded movie on that tiny, LCD display on the front of the printer just sucks.


You're doing it wrong. You're supposed to print out each frame and put together a flip book to watch the movie. The big problem is you need really big hands....
2610.6.2008 23:05
7thsinger
Send private message to this user
AfterDawn Addict

That's where i've been screwing it up!

Thanks for the tip Vurbal.

Not very funny. It is like a near sighted hit man who kills twice as many people as he should because he can't see and is TOO LAZY to check before he kills them. As long as it is not me...