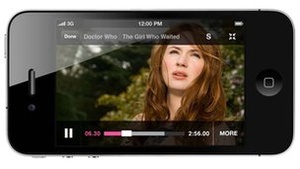 BBC has expanded its iPlayer app to work on iPhones, and over 3G.
The company says the app will work with all of the UK's 3G mobile networks.

For the time being, the Android version of the app only works over Wi-Fi but the Beeb says it is working on updating the software for 3G.

Some analysts are worried the move will put strain on the carriers, which may lead to reduced service for users that aren't even using the streaming service:

One potential danger is that people are going to run up unexpectedly high data bills, and the other is the strain that this is going to put on the system if a lot of people start streaming in this way.

The system would default to prioritise voice calls, so it wouldn't affect voice calls, but it would mean that people would be unable to use their data services.

BBC for its part says "we have included a cost warning message in the BBC iPlayer app to ensure people are aware of their tariffs."
Tweet
Tags: streaming BBC iPlayer iOS 3G
<Major Kindle Fire update coming to address customer complaints >Legislators want your input on OPEN, an alternative to SOPA
Previous Next
Comments have been disabled for this article.