Recent headlines | Samsung Android 12 update timeline - when your phone will get it
AfterDawn > News > OnLive sold for just $4.8 million 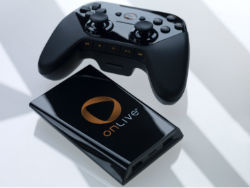 OnLive, the cloud-based gaming company, was sold for just $4.8 million, literally pennies on the dollar for the company that was once valued at close to $2 billion.
The service allowed gamers to play PC games via a set-top box on your HDTV or on a PC that does not have powerful specs. The games were streamed via cloud servers and cost a nominal amount per month.

OnLive seemed to be having a good year, signing deals with Google's Android, Ouya and others. However, two months ago, the wheels fell off and the company laid off all its employees and began looking for a buyer before going bankrupt.

As of today, we have learned that Lauder paid just $4.8 million for the service: "Had the sale to the buyer not taken place, the assignee would have been left with inadequate capital to fund the significant costs to preserve and market OnLive's patents and other intellectual property, thus greatly reducing expected recoveries essentially to those of a forced piecemeal auction," added Joel Weinberg, president of Insolvency Services Group (ISG), the firm in charge of the potential bankruptcy proceedings.
Tweet
Tags: OnLive Sale Cloud
<Reuters agrees, iPad Mini is coming on October 23rd >New guide: EasyBD Blu-ray authoring tutorial lesson 1 - A basic disc
Previous Next

This is why the PHANTOM CONSOLE was never released years ago.
http://en.wikipedia.org/wiki/Phantom_Entertainment

I remember when this was first created, a couple years ago. I'm not surprised by this news. I don't think people want to pay monthly fees for things. And i think people really want tangible things.