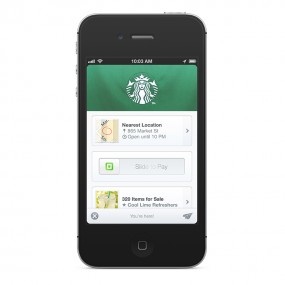 As part of the deal struck between the companies earlier this year, Starbucks is now accepting Square's mobile payment application at almost 7000 stores around the nation.
Starbucks customers are already quite familiar with app payments, having been able to use Starbuck's own app for the better part of two years on their iPhones or Android devices.

There are some glaring differences between both services, however.

The Starbucks app requires you to have a Starbucks card, with pre-loaded money on there, whether done online or with an actual card. Square's service allows you to pay with a linked debit card or credit card. The Square Wallet can also obviously be used at places other than Starbucks.

I'm sorry but how lame and totally unnecessary is this???

Next thing you know, we'll be able to swipe a card in our asses and fart out a receipt then get a virtual coffee implant that allows us to remember having drank the coffee. (Total Recall - 1990 anyone???_

JUST BRING A FRAKKING CREDIT CARD WITH YOU FOR CHRIST'S SAKE!