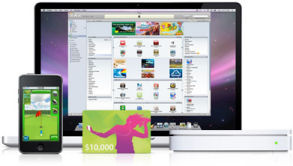 According to Appsfire, Apple has now seen 1 million apps submitted to the marketplace since launch in July 2008.
The count includes all iOS apps (iPad and iPhone) and does not include Mac App Store applications.

The store has seen 35 billion downloads in four years and is accessed by nearly all of Apple's 400 million users.

It may be some time until Apple sees 1 million live apps, since many have been removed by Apple or the developers themselves, and others have been taken down by copyright notices. Some have also been rejected right from the get go.

Rival Android has reached 25 billion downloads and has over 650,000 live apps.
Tweet
Tags: Apple App Store iOS 1 million appsfire
<Microsoft will give Windows 7 users some DirectX 11.1 features >After years, AC/DC albums make their way to iTunes
Previous Next
Comments have been disabled for this article.