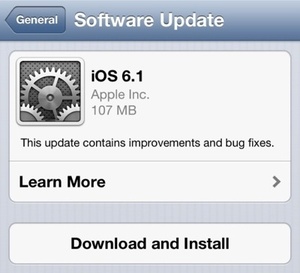 Apple has released their next major update for iOS today, version 6.1.
The update is available to iPad, iPhone, iPod touch, and Apple TV users and is available OTA.

Apple states that the following have been updated, added or improved (via 9to5):

Purchase movie tickets through Fandango via Siri (US only)

Apple's Phil Schiller was quick to call iOS 6 the most popular version of the OS, yet: "Nearly 300 million iPhone, iPad and iPod touch devices on iOS 6 in just five months, it may be the most popular new version of an OS in history."
Tweet
Tags: operating system lte iPad iPhone ios 6.1
<Barnes & Noble to close up to 20 stores per year for next decade >Specs leaked for first HP Chromebook
Previous Next

But they couldn't include a new feature to keep the mindless haters from hating it.

Originally posted by xnonsuchx: But they couldn't include a new feature to keep the mindless haters from hating it.

And apparently they cannot leave out enough features to keep the brainwashed sheep from loving it and lining up to get a new one every new iGadget release.

Oh and BTW I have an iPhone 4S and while it is a good device it is still just a stupid phone that does pretty much the sme thing other stupid phones do.
"Have you tried turning it off and on again?" ~ Roy Trenneman

Well, it definitely takes the same type of infantile mindset to be a hater as it does to be a fanboy.